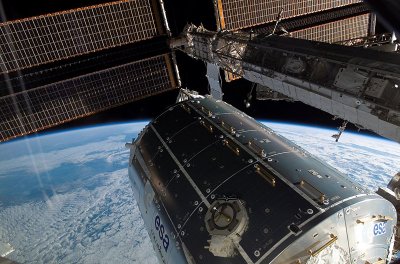 Photo of the Columbus laboratory attached to the International Space Station taken by a crewmember on the Space Shuttle Atlantis while docked with the ISS. Image credit: NASA. 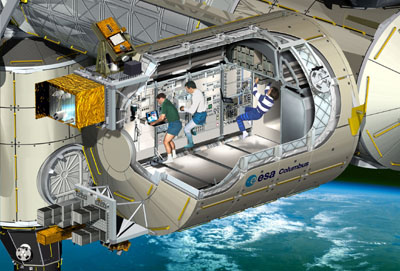 The Columbus Laboratory is a research module that is the European Space Agency's largest single contribution to the International Space Station. The Columbus Laboratory was launched aboard the Space Shuttle Atlantis on February 7, 2008 on flight STS-122 and subsequently connected to the rest of the orbiting outpost by NASA's Node 2 module.

The physical design and layout of the Columbus laboratory is not unlike the three multi-purpose logistics modules (MPLM) built by the Italian Space Agency and used for transporting scientific experiments, materials and supplies to the station via the space shuttles. But unlike the visiting logistic modules that return to Earth with the shuttles, Columbus will permanently expand the research facilities of the space station.

Columbus is 6.87 m (about 23 ft) long and 4.48 m (about 15 ft) in diameter, allowing it to hold 10 racks of experiments, each approximately the size of a phone booth. Each rack provides independent controls for power and cooling, as well as communication links to earthbound controllers and researchers. These links will allow scientists all over Europe to participate in their own experiments in space from several user centers and, in some cases, even from their own work locations.

The Columbus laboratory's flexibility provides room for the researchers on the ground, aided by the station's crew, to conduct thousands of experiments in life sciences, materials sciences, fluid physics and other research in a weightless environment not possible on Earth. In addition, the station crew can conduct experiments outside the module within the vacuum of space, thanks to four exterior mounting platforms that can accommodate external payloads. The first two experiment packages were flown to the station on the shuttle with the module.

The control center for the work that will be conducted in the Columbus laboratory is located in Oberpfaffenhofen, Germany. From there, ground controllers can communicate with the module as the space station orbits the Earth, as well as with researchers across Europe and their partners in the United States and Russia.

The Columbus laboratory is expected to provide at least 10 years of science capabilities for researchers, whether they're working at their desks on Earth or floating weightlessly in space.