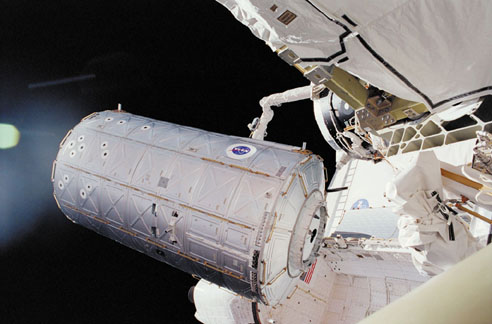 The Destiny Laboratory being delivered to the ISS by the Space Shuttle in 2001.

The photo on the left shows the Destiny Lab's interior as it appeared when it was added to the Station in 2001. A year later, as the photo on the right shows, the Lab was a busy, well-equipped facility. Image credit: NASA.

Destiny is the primary research laboratory at the International Space Station for U.S. payloads, supporting a wide range of experiments and studies in a microgravity environment. It is designed to hold sets of modular racks that can be added, removed or replaced as necessary. They can contain fluid and electrical connectors, video equipment, sensors, controllers and motion dampeners to support whatever experiments are housed in them.

When it arrived at the Station, Destiny had five racks housing electrical and life-support systems. Subsequent shuttle missions have delivered more racks and experiment facilities, including the Microgravity Science Glovebox, the Human Research Facility, and five racks to hold various science experiments. Eventually, Destiny will hold up to 13 payload racks with experiments in human life science, materials research, Earth observations and commercial applications.

Destiny's window, which takes up the space of one rack, makes possible the ability to shoot very high quality photos and video. Station crew members use video and still cameras at the window to record Earth's ever-changing landscapes below. Imagery captured from this window has given geologists and meteorologists the opportunity to study floods, avalanches, fires and ocean events such as plankton blooms in a way they have never seen before. Imagery captured from this window has given international scientists the opportunity to study such features as glaciers, coral reefs, urban growth and wild fires.

Before the Station is complete, Destiny will be joined by laboratory modules sponsored by the Japanese Aerospace Exploration Agency, European Space Agency and Roskosmos.

In addition to its role as a science facility, Destiny also contains the control center for the Station's robotic arm operations.

The aluminum module is 28 ft long and 14 ft in diameter. The lab consists of three cylindrical sections and two endcones with hatches that can be mated to other station components. A 20-in-diameter window is located on one side of the center module segment.

An exterior waffle pattern strengthens the hull of the lab. The exterior is covered by a debris shield blanket made of a material similar to that used in bulletproof vests on Earth. A thin aluminum debris shield has been placed over the blanket for additional protection.

The Laboratory Module arrived at Kennedy Space Center, Fla. in November 1998 to begin final preparations for its launch on February 7, 2001, aboard Space Shuttle mission STS-98, Station assembly flight 5A.