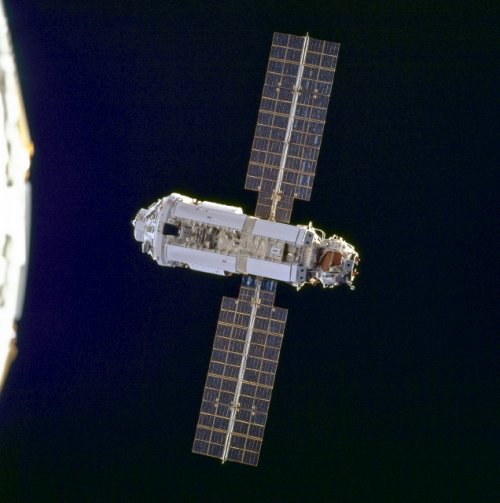 The Zarya Module, also known by the technical term Functional Cargo Block and the Russian acronym FGB, was the first component launched for the International Space Station. This module was designed to provide the station's initial propulsion and power. The 19,323-kg (42,600-lb) pressurized module was launched on a Russian Proton rocket in November 1998.

Image to right: Zarya approaches the out-of-frame Space Shuttle Endeavour and the Unity Node during STS-88. The US-funded and Russian-built Zarya ("Sunrise" in Russian) is a US component of the station, although it was built and launched by Russia. The module was built by the Khrunichev State Research and Production Space Center, which is also known as KhSC, in Moscow under a subcontract to The Boeing Company for NASA. Only weeks after Zarya reached orbit, Space Shuttle Endeavour made a rendezvous and attached a US-built connecting module called Node 1, or Unity. The Zarya Module provided orientation control, communications, and electrical power attached to the passive Node 1 while the station awaited launch of the third component, a Russian-provided crew living quarters and early station core known as the Zvezda Service Module. The Service Module enhanced or replaced many functions of Zarya. The Zarya module is now used primarily for its storage capacity and external fuel tanks.

The Zarya Module is 12.6 m (41.2 ft) long and 4.1 m (13.5 ft wide) at its widest point. It has an operational lifetime of at least 15 years. Its solar arrays and six nickel-cadmium batteries can provide an average of 3 kW of electrical power. Its side docking ports accommodate Russian Soyuz piloted spacecraft and unpiloted Progress resupply spacecraft. Each of the two solar arrays is 10.7 m (35 ft) long and 3.4 m (11 ft) wide. The module's 16 fuel tanks combined can hold more than 5.4 metric tons (6 tons) of propellant. The attitude control system for the module includes 24 large steering jets and 12 small steering jets. Two large engines were available for reboosting the spacecraft and making major orbital changes before Zvezda arrived.

Construction of the Zarya Module began at KhSC in December 1994. It was shipped to the Baikonur Cosmodrome, Kazakhstan, launch site to begin launch preparations in January 1998. The three-stage Proton rocket launched the module into a 220.4- by 339.6-km (137- by 211-statute mile) orbit. During launch, the module's systems were in an idle mode to conserve battery power. After reaching the initial elliptical orbit and separating from the Proton's third stage, a set of preprogrammed commands automatically activated the module's systems and deployed the solar arrays and communications antennas. Using the Russian Kurs system, the Zarya performed an automated and remotely piloted rendezvous and docking with the Service Module in orbit. After several days of operational tests, the module was commanded to fire its engines and circularize its orbit at an altitude of about 386.2 km (240 statute miles), the orbit at which Endeavour made rendezvous and captured the spacecraft to attach it to the US-built Unity Node.