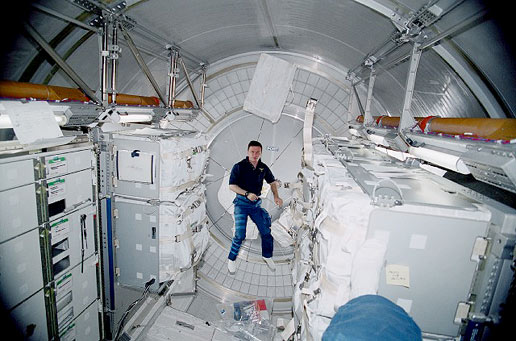 The Multi-Purpose Logistics Modules, or MPLMs, of which there were three, are pressurized modules, built by the Italian Space Agency, that serve as the International Space Station's 'moving vans,' carrying equipment, experiments and supplies to and from the Station aboard the Space Shuttle.

The unpiloted, reusable MPLM functions as both a cargo carrier and a Space Station module. Mounted in the Space Shuttle's cargo bay for launch and landing, it is berthed to the Station using the Shuttle's robotic arm after the Shuttle has docked. While berthed to the Station, racks and equipment are unloaded from the module and then old racks and equipment may be reloaded to be taken back to Earth.

In order to function as an attached Station module as well as a cargo transport, the MPLM also includes components that provide some life support, fire detection and suppression, electrical distribution and computer functions. Eventually, the modules also will carry refrigerator freezers for transporting experiment samples and food to and from the Station.

Although built in Italy, the logistics modules are owned by the US and provided in exchange for Italian access to U.S. research time on the Station.

The cylindrical module is approximately 21 ft long and 15 ft in diameter, weighing almost 4.5 tons. It can carry up to 10 tons of cargo packed into 16 standard Space Station equipment racks. Of the 16 racks the module can carry, five can be furnished with power, data and fluid to support a refrigerator freezer.

The Italian Space Agency chose the names of the modules because they denote some of the great talents in Italian history:

• Donato di Niccolo Di Betto Bardi, one of the greatest sculptors of all time and one of the founders of modern sculpture

• Raffaello Sanzio, an artist whose work stands alone for its visual achievement of human grandeur, both in clarity of form and ease of composition.