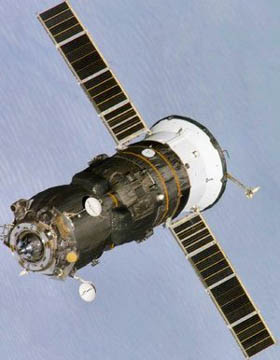 Progress is an unmanned Russian supply vessel used to ferry materials to and from manned space stations. Progress was derived from the Soyuz spacecraft. The Soyuz descent module was replaced by a sealed unit that could carry about 1 ton of propellants for Salyut's propulsion system, while the orbital module was transformed into a cargo bay and made accessible to astronauts by a docking system and a connecting hatch. In total, Progress had a mass of about 7,000 kg, including 1,000 kg of propellant for Salyut and 1,300 kg of cargo. It was first launched on Jan 20, 1978 to rendezvous with Salyut 6.

With the arrival of Mir, a new version of the supply ship, known as Progress-M, was brought into service. This had a recoverable capsule that could be used to return material, such as samples of crystals grown under weightless conditions, to Earth.

The latest version of Progress, called the Progress-M1, has a larger cargo capacity and has been developed for use with the International Space Station. Progress-M1 can carry up to 2,230 kg of cargo, of which a maximum of 1,950 kg can be propellant and a maximum of 1,800 kg can be equipment or supplies.