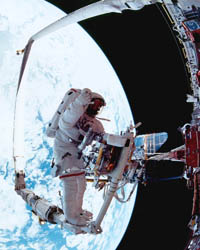 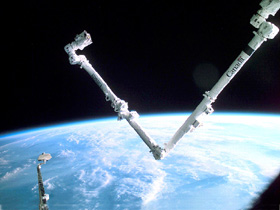 Remote Manipulator System (RMS) may refer to either of two large robot arms and associated equipment, one of which was attached to the Space Shuttle Orbiter for payload deployment and retrieval, the other is attached to the International Space Station (ISS). The RMSs were designed, developed, tested and built by the Canadian company Spar Aerospace, with some components from other Canadian firms, and so are also known as Canadarm (Shuttle version) and Canadarm 2 (ISS version).

The Shuttle's RMS is 15.3 m long, 38 cm in diameter, and weighs 408 kg. It has six joints that correspond roughly to the joints of the human arm, with shoulder yaw and pitch joints, an elbow pitch joint, and wrist pitch, yaw, and roll joints. The end effector is the unit at the end of the wrist that actually grabs, or grapples, the payload. Two lightweight boom segments, called the upper and lower arms, connects the shoulder and elbow joints, and the elbow and wrist joints, respectively. The Shuttle RMS can handle payloads with masses up to 29,500 kg. It can also retrieve, repair and deploy satellites; provide a mobile extension ladder for spacewalking crew members; and be used as an inspection aid to allow flight crew members to view the orbiter's or payload's surfaces through a TV camera on the arm. One flight crew member operates the RMS from the aft flight deck control station, and a second flight crew member usually assists with television camera operations.

The 17.6-m-long RMS fitted to the ISS in April 2001 is crucial to the rest of the Space Station's assembly. It forms the main component of the Mobile Service System (MSS) for moving equipment and supplies around the ISS, supporting astronauts working in space, and servicing instruments and other payloads attached to the Station. The other parts of the MSS are the Special Purpose Dextrous Manipulator (SPDM), a small, highly advanced detachable two-armed robot that can be placed on the end of the RMS for doing detailed assembly and maintenance work, and the Mobile Remote Service Base System (MRSBS), a movable platform for the RMS and SPDM that slides along rails on the Station's main truss structure.