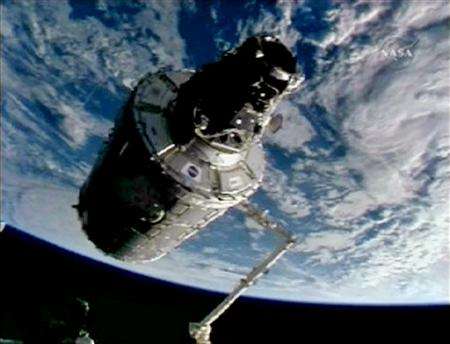 In the grasp of the International Space Station's Canadarm2, the Harmony node with the Pressurized Mating Adapter (PMA-2) attached is moved from its temporary location on the left side of the Unity node to its new home on the front of the Destiny laboratory. Credit: NASA.

The installation of NASA's Harmony Node increased the living and working space inside the International Space Station to approximately 500 cu m (18,000 cu ft). It also allowed the addition of international laboratories from Europe and Japan to the station.

It also provides connecting ports for Multi-Purpose Logistics Modules, the Japanese H II Transfer Vehicle and the Pressurized Mating Adapter 2 to which space shuttles dock. The Space Station Robotic Arm, Canadarm2, can operate from a powered grapple fixture on the exterior of Node 2.

Under contract of the Italian Space Agency, Alenia Spazio in Turin, Italy, led a consortium of European sub-contractors to build the node. It was built for NASA under a barter agreement with the European Space Agency in exchange for the launch of the European Columbus Laboratory by the space shuttle to the International Space Station.

Node 2 arrived at Kennedy Space Center, Fla. on June 1, 2003 to begin final preparations for its launch on shuttle mission STS-120, station assembly flight 10A. The name for Node 2, Harmony, was announced on March 15, 2007.