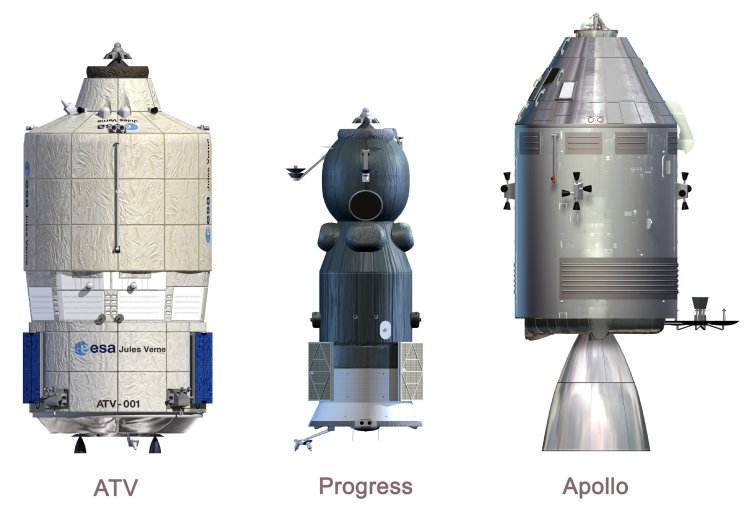 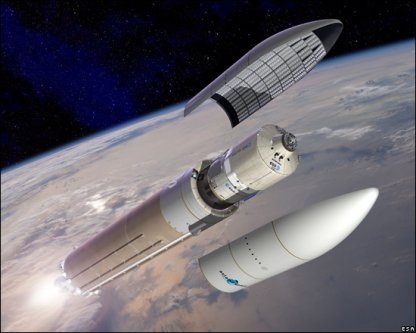 The shroud around the ATV separates as it reaches orbit. 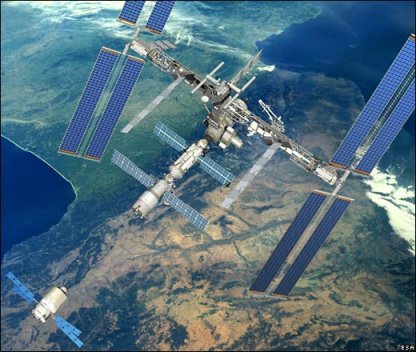 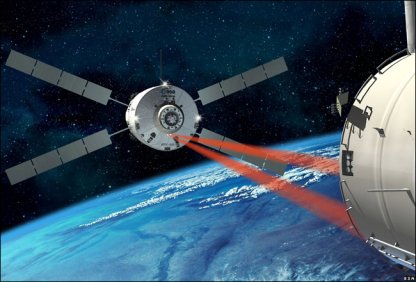 An Automated Transfer Vehicle is an unmanned spacecraft developed by the European Space Agency (ESA) to supply the International Space Station with food, water, fuel, and experimental equipment. In addition, ATVs are able to re-boost the ISS whose 300-km-plus orbit tends to shrink over time due to friction with the atmosphere.

Each ATV is launched by an Ariane 5 from Kourou, French Guiana. After approximately two days of flight it arrives at the ISS and docks automatically to the Russian Service Module Zvezda. The first launch of an ATV (Jules Verne) took place on Mar 9, 2008.

As big as a double-decker bus and with a mass at launch of almost 20 tonnes, the ATV is the biggest and most complex spacecraft Europe has ever flown. It is also the largest spacecraft capable of automatic rendezvous and docking.

The ATV has three times the capacity of the Russian Progress spacecraft, which it is designed to complement. Like the Progress, it carries both bulk liquids and relatively fragile freight which is stored in a cargo hold kept in a pressurized shirtsleeve environment so that astronauts can have access to it without putting on a spacesuit.

Each ATV weighs 20.7 tonnes at launch and has a cargo capacity of 9 tonnes, including:


Journey to the space station

The ATV is delivered by its Ariane launch vehicle into a 23-km-high (140 mi) orbit, underneath the ISS. It then uses its own engines to raise its height and edge closer and closer to the space station over a series of orbits. The ATV's onboard computers are in charge of maneuvers. In the latter stages, optical sensors guide the ATV into position on the end of the Russian Zvezda module. Although both ATV and ISS are moving relative to the Earth's surface at some 27,000 km/h (17,000 mph), they lock together at less than walking pace. Once the ATV is securely docked, the station crew can start to unpack.

The crew enter the pressurized part of the ATV. This is similar in layout to the Italian-built cargo modules, known as Multi-Purpose Logistics Modules, which are taken to the ISS by the Space Shuttle to deliver consumables, equipment, and tools. Oxygen brought up by the ATV is vented directly into the station, water is carried out in bags, and fuel is piped across to Zvezda. An ATV stays at the ISS for about six months. At intervals of 10 to 45 days, the ATV's thrusters are used to boost the station's altitude.

Over time, the station crew use the vehicle as a refuse skip, filling the cargo section with up to 6.4 metric tons of waste. After undocking, the ATV destroys all this material, and itself, in a controlled re-entry and burn-up over the Pacific Ocean.

The first ATV – dubbed "Jules Verne" – was launched atop a specially prepared Ariane 5 in March 2008. Four others are currently planned.

On the design board now is a re-entry capsule that would be jettisoned by a returning ATV prior to the vehicle's destruction in the atmosphere. The capsule would land safely any experimental items from the ISS that were required for further study in Earth labs.

Another possibility is that ATVs could be given a more open architecture. This would overcome the approximately 80-cm-width (30 in) restriction placed on ATV packages by the size of the hatch. If the vehicle were made with no side walls, larger components such as batteries and gyros could be delivered to the station. Spacewalking astronauts could then maneuver these bulkier items into place with the help of the station's robotic arm. Although the ATV is not currently designed to carry astronauts the fact that it has a pressurized compartment inside which people can move around safely demonstrates that an ATV-based human transportation system could eventually be developed.