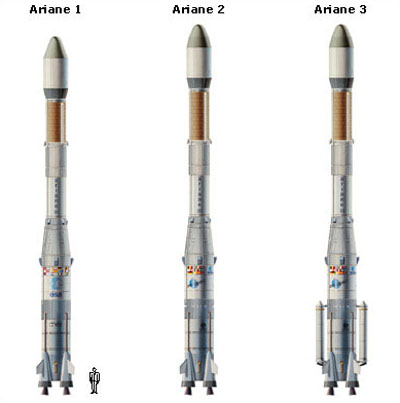 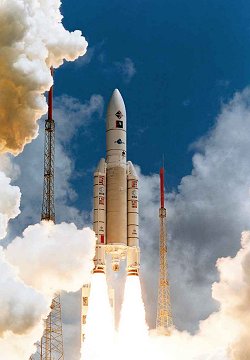 Ariane is a series of launch vehicles developed by ESA (European Space Agency). The decision to develop an autonomous European access to space was taken at the same meeting, in Brussels in July 1973, at which ministers also agreed to set up the European Space Agency. The maiden flight of Ariane 1 on December 24, 1979, marked Europe's arrival on the international satellite launch market. Changing payload requirements prompted the development of the Ariane 2 and 3 in the early 1980s, then the Ariane 4, and most recently the Ariane 5. In March 1980, Arianespace was formed to handle Ariane production and commercialization.

Europe's first successful commercial launch vehicle, designed to carry two communications satellites at once. Its development took eight years, and was based on the design of a replacement rocket for the ELDO (European Launcher Development Organisation) Europa. Ariane 1 flew 11 times from 1979 to 1986, failed twice, and launched a number of communications and other satellites, and the Giotto probe to Halley's Comet.

Upgrades that provided more lift capability. The first and third stages of the Ariane 2 and 3 were lengthened from those of their predecessor to enable a longer burn time, and the engines of stages one, two, and three were increased in thrust. Ariane 3 had strap-on solid- or liquid-propellant boosters for additional power and flexibility. Out of a total of 17 launches, Ariane 2 flew successfully five times between 1987 and 1989 and Ariane 3 eleven times from 1984 to 1989.

Originally designed as both a commercial satellite and manned spacecraft launch vehicle. Ariane 5's 17,500-kg LEO (low Earth orbit) payload capacity was intended to accommodate the Hermes space plane. After Hermes was cancelled, Ariane 5 was converted to a strictly commercial launcher. Built around a central core with a single liquid hydrogen/liquid oxygen Vulcan engine, it uses two large solid rocket boosters to provide a major fraction of its initial thrust. A small storable-propellant second stage is used for final velocity and insertion maneuvers. After a failure on its first launch attempt in 1996 in which the original Cluster mission was lost, Ariane 5 came through a subsequent test launch successfully in October 1997 and made its first successful operational flight in December 1999, carrying ESA's XMM-Newton observatory. Five more successful commercial launches followed through Mar 2001, but an upper stage failure during a July 2001 launch left two valuable communications satellites, including ESA's own ARTEMIS, in incorrect orbits. All subsequent launches of Ariane 5 have been successful with the exception of the first launch of the heavy-lift version known as ECA, with a 10,000-kg payload capability to GTO, on Dec 11, 2002.