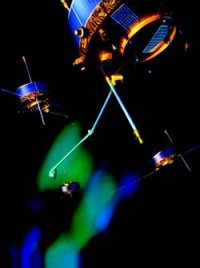 Cluster is an ESA (European Space Agency) mission involving four identical satellites – Salsa, Samba, Tango, and Rumba – which fly in formation to study the interaction between the solar wind and Earth's magnetosphere in three dimensions. Each satellite carries a suite of 11 instruments that measure electric and magnetic fields, electrons, protons, and ions, and plasma waves. The Cluster I satellites were lost following the explosion of their Ariane 5 launch vehicle on its maiden flight on 4 June 1996. (Re-use of flight software from Ariane 4 was found to be the cause of the accident – faulty program logic that only took effect on Ariane 5's launch trajectory.) Cluster II is a repeat of the original mission and uses some of its spare parts.