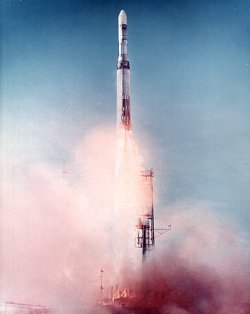 ELDO (European Launcher Development Organisation) was a multinational consortium, formed in the 1960s with headquarters in Paris, the aim of which was to build an indigenous European space launch vehicle. ELDO came about after the cancellation of the Blue Streak program by the British government in April 1960. Since the development of this missile was almost complete, it was planned to use it as the first stage of a satellite launcher. Britain then proposed a collaboration with other European countries to build a three-stage launcher capable of placing a one-ton payload into low Earth orbit.

ELDO began work in 1962 and was formally signed into existence in 1964, bringing together Germany, France, Belgium, Italy, the Netherlands, and Britain, with Australia as an associate member. Britain was to provide the first stage of the launcher, France the second, and Germany the third stage. Experimental satellites would be developed in Italy and Belgium, telemetry and remote controls in the Netherlands, and launches would take place from Woomera in Australia.

ELDO-A, later renamed Europa-1, was to measure 31.7 m in length and weigh more than 110 tons. It was originally planned to put a payload of 1,000–1,200 kg into a 500-km circular orbit by 1966. The Blue Streak first stage was to fire for 160 sec after launch, followed by the French Coralie second stage for the next 103 sec, and the German third stage for a final 361 sec, taking the payload into orbit. Testing of the Blue Streak first stage, which began at Woomera in June 1964, went well, but the program nevertheless fell behind schedule. In mid-1966 it was decided to change Europa-1 into a four-stage launcher able to place a satellite in geostationary transfer orbit and to use, for this purpose, the Guiana Space Centre. However, a series of subsequent launch failures and the resignation of Britain and Italy from the project in 1969, led to the cancellation of Europa-1 in 1970. Work began instead on a new launcher, Europa-2, 90% funded by France and Germany, which included a perigee kick stage. But Europa-2 was launched only once, unsuccessfully on November 5, 1971, and its failure led to the program's cancellation in favor of a more ambitious project, Europa-3. Although Europa-3 was never realized, its first stage was used as a basis for the Ariane launcher.