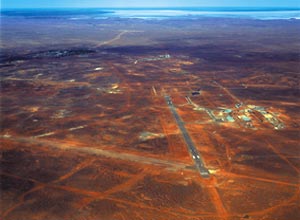 Woomera is an Australian launch complex at 31.1° S, 136.8°E. In the late 1940s, Britain, looking for a large remote area in which to test long-range weapons such as the planned "Super V-2" settled upon this region of the central Australian desert. Construction and the building of a small town, began in 1947, the name "Woomera" being chosen because it is the Aboriginal word for a spear-throwing device.

Woomera was used to test a variety of projects including the Blue Steel, Bloodhound, and Thunderbird missiles, and played an important role in the early British and European space programs. In 1957 the first Skylark was launched from here, as were the Black Knight reentry test rockets. Throughout the 1960s Woomera was used by ELDO (European Launcher Development Organisation) to test the Europa I launch vehicle but when this project ended, launches of Europa II were moved to the equatorial site of Korou in French Guinea. In 1967 Woomera became a spaceport when a Redstone rocket purchased from the United States placed Australia's first satellite in orbit. This was followed in 1971 by the first British satellite, Prospero, on a Black Arrow. By the 1970s, however, launches from Woomera had dwindled and, although the site was still used as part of the Anglo-Australian Joint Project until 1980, the town went into decline. Recently though, the American company Kistler Aerospace has announced plans to use Woomera to launch satellites on reusable rockets.