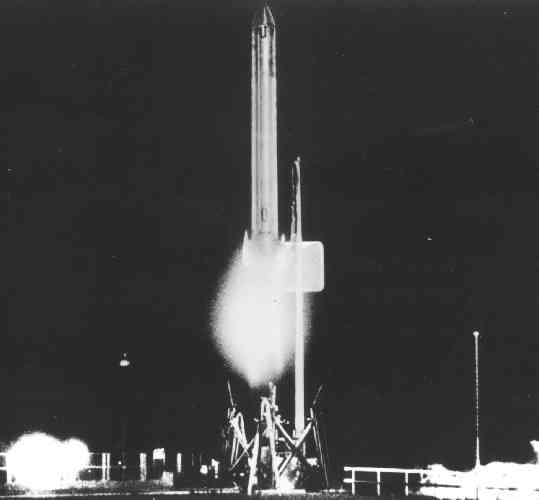 Black Knight was an experimental rocket built by Britain to support the development of its Blue Streak ballistic missile. Conceived in 1955 and first launched in 1958, it enabled studies to be conducted on long-range-missile guidance. As in the case of all large British rockets, except for Blue Streak, it was powered by a mixture of kerosene and hydrogen peroxide – the same liquid propellant used by the German World War II Messerschmitt 262 interceptor. It was also built in sections so that it could be easily shipped to and assembled at its launch site in Woomera, Australia.

Consisting in its first version of a single-stage, 10.2 m high, 1.8 m in diameter, and weighing 5.4 tons at takeoff, Black Knight was propelled by an Armstrong-Siddeley Gamma 201 engine equipped with four swiveling nozzles that developed 75,000 newtons (N) of thrust during a burn time of 140–145 s. Four fins, each with a span of 1.8 m, provided aerodynamic stabilization, and two were equipped with small pods containing tracking equipment. On September 7, 1958, Black Knight 01 took off from Woomera and reached what was then a new record altitude of 564 km – an impressive achievement considering that the first Soviet and American satellites, Sputnik 1 and Explorer 1, had already been launched.

Following the cancellation of Blue Streak in 1960, Black Knight's future seemed in jeopardy. However, the rocket had proved so successful and cost effective that it found new life as part of the Gaslight program, carried out in cooperation with the United States and Australia. The main objective of this program was to study the effects of high-speed reentry on dummy nuclear warheads. It required the development of a two-stage version of Black Knight with the second stage, powered by a so-called Cuckoo engine (a Skylark booster), pointing downward. This new variant of Black Knight stood 11.6 m high and weighed 6.35 tons. Six Gaslight flights were carried out up to June 1961. In 1962, the tests continued as part of the Dazzle program, in cooperation with the United States, Canada, and Australia. In August 1962, a 95,000-N Gamma 301 engine replaced Gamma 201 on the first stage and eight more flights were conducted with this more powerful engine. The last of the 22 Black Knight flights took place in November 1965.