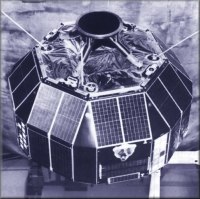 Prospero was Britain's first and only satellite launched by an indigenous rocket, the Black Arrow. Prospero was manufactured by the British Aircraft Corporation and Marconi and placed in a polar orbit, in which it remains today. It tested equipment for future satellites and carried an experiment to measure the incidence of micrometeoroids. The satellite operated successfully until 1973 and was contacted annually until 1996, using telemetry from the Lasham groundstation.