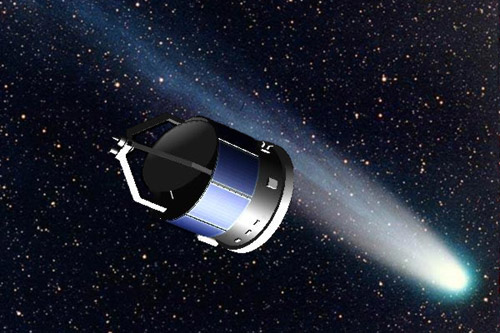 Giotto was a European Space Agency probe that encountered Halley's Comet in March 1986. Images were obtained of the comet's nucleus and measurements made of Halley's composition. The spacecraft was struck by a small particle two seconds and 605 km (376 mi) before closest approach which knocked its communications antenna out of alignment with Earth. Further impacts also destroyed the probe's camera. However, communications were re-established after the encounter and Giotto subsequently went on to an encounter with Comet 26P/Grigg-Skjellerup in 1992, sending back of data. The spacecraft passed close by Earth on July 1, 1999.

The probe was named after the Italian painter, architect, and sculptor Giotto di Bondone (1266–1337) whose fresco, Adorazione dei Magi (Adoration of the Magi), painted sometime between 1304 and 1306, features an accurately represented comet above the Nativity stable. The fresco's realistic portrayal strongly suggests that it was based on the artist's first-hand observation of the comet during its appearance in the skies over Europe in October 1301.