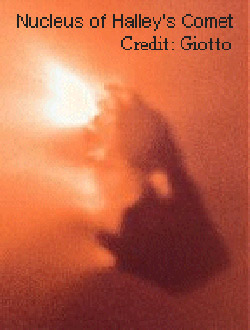 Nucleus of Halley's Comet as seen by Giotto.

Halley's Comet (1P/Halley) is the most famous of short-period comets. It is named for Edmond Halley who first computed its orbit and predicted its return in 1758. Records of it were subsequently traced back to 240 BC.

Halley's Comet goes around the Sun once every 76 years – roughly a human lifetime. Upon its return to the inner solar system in 1986, it was met by a small flotilla of spacecraft, including ESA's Giotto, Japan’s Sakigake and Suisei, and Russia’s twin Vega probes.

Giotto sent back images of Halley's potato-shaped >nucleus (see photo right), measuring 16 × 8 km (10 × 5 mi). The nucleus is dark, reflecting only 4% of the sunlight falling on it, and rotates once every 3.7 days. On the sunward side, temperatures were observed to reach 77°C (350 K) which, in the zero pressure of space, is enough to turn ice into vapor. Measurements by Giotto's mass spectrometer indicated a composition for Halley of 45% water ice, 28% stony minerals, and 27% organic material.