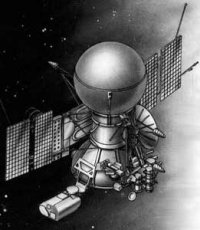 Vega 1 and 2 were two identical Soviet spacecraft each carrying a Venus lander and Halley's Comet flyby probe. The spacecraft released balloons into the atmosphere of Venus and landers onto the surface before flying on to a rendezvous with Halley in March 1986. The twin Vegas passed 8,900 km and 8,000 km, respectively, from the comet's nucleus, returning photographs and analyzing ejected gas and dust. Both had a mass of about 4,000 kg and were launched by a Proton rocket.