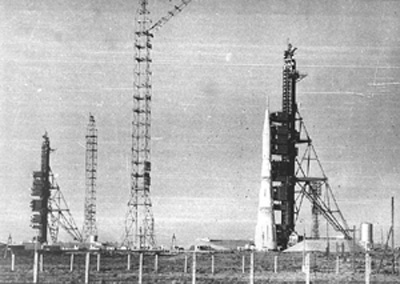 An N-1 and its launch tower. A second launch tower and a pair of taller towers (for lightning protection) are to the left.

The N-1 was the Soviet counterpart to the Saturn V, intended as the launch vehicle for the Soviet Union's attempt at a manned landing on the Moon. The N-1 would have been the world's most powerful booster but was beset by technical problems and never made a successful flight. Work on it began in 1962 under the direction of Sergei Korolev.

On Nov 25, 1967, a mock-up of the N-1 was installed on launch pad Number 1 at Baikonur for 17 days of electrical tests. The first flight-ready vehicle was erected on the same pad on May 7, 1968, but had to be returned to the assembly building after cracks were found in the first stage structure. After repairs, it was again set up on the launch pad in Nov 1968, only to be replaced with another mock-up for further tests and launch team training. Finally, in mid-Jan 1969, N-1 Number 3L was moved to the pad ready for its first test flight. The test was a huge gamble since, in a desperate bid to get to the Moon first, the large cluster of first-stage engines had never been tested as a group. The payload was originally to have been an unmanned Lunar Orbiter Cabin (LOK) and Lunar Cabin (LK) designed to carry Soviet cosmonauts to a Moon landing (see Russian manned lunar programs). But as neither the LOK nor the LK were yet ready to fly, the payload was switched to modified version of the circumlunar spacecraft L-1 known as the L-1S. After four weeks of on-pad preparation, the first N-1 was ready to go. Hours before the launch, chief designer Valery Mishin, who had taken over the project after Korolev's death in 1966, went to the launch pad while propellants were being loaded and christened the rocket by breaking a bottle of champagne against its hull. On Feb 21, 1969, the N-1 lifted off into clear skies – and trouble. Seconds into the flight, two of the 30 first-stage NK-33 engines shut down due to a problem with the KORD control system which guided the vehicle. The N-1 was designed to operate with as many as four first-stage engines out of action, so the flight continued with the other engines compensating for the loss. At T+25 sec the engines were throttled back as planned as the N-1 passed through the point of maximum dynamic pressure, and at T+65 sec were throttled back up to full power. At this point the lack of adequate testing of the main engines became apparent. The engines throttled up more quickly than expected, causing stronger than planned vibrations. A liquid oxygen (LOX) pipeline burst and started a fire in the engine compartment before KORD could shut down the affected engine. The surrounding engines and turbopumps quickly overheated and exploded. At T+70 sec, KORD finally shut down all engines and the launch escape system was activated. The L-1S capsule was safely recovered about 35 km downrange, but the now powerless N-1 slammed into the Kazhak steppes and exploded some 48 km from its launch pad.

In a last ditch effort to win the Moon race, a second N-1 was modified and prepared for launch. Following the successful tests of the American Lunar Module in Earth orbit during Apollo 9 in Mar and the test in lunar orbit by Apollo 10 in May, only a failure of Apollo 11 and a successful N-1 test would leave the Soviets with any chance of being the first to land a man on the Moon. On Jul 3, the second N-1, Number 5L, took off from pad Number 1 with another L-1S as its primary payload. What followed was an even greater disaster than the first. At the very point of liftoff, debris in the LOX tank was sucked into one of the first-stage engines, causing its turbopump to explode. This led to a second engine failure, which in turn triggered a chain reaction, destroying several neighboring engines and damaging the KORD control system. The launch escape system was activated and carried the L-1S payload to safety. However, the fully fueled N-1 fell back onto its launch pad just 18 sec after launch, destroying the rocket and pad Number 1, heavily damaging pad Number 2, and ending any hope that the Soviets could reach the Moon ahead of the United States.

After two years of rocket modification and pad reconstruction, the N-1 was ready to launch again. However, there would be only two further flights, on June 27, 1971, and Nov 23, 1972. Both again ended in first-stage failures, at T+51 sec and T+107 sec, respectively. In early 1974 the N-1 project was abandoned and the six remaining rockets of the 10 originally built dismantled.