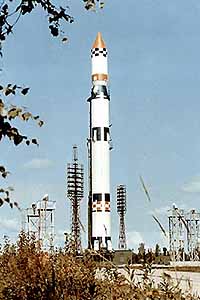 Tsyklon is a family of Russian launch vehicles derived from the Yangel-designed R-36 (Scarp) intercontinental ballistic missile and first introduced in 1966 (see "R" series of Russian missiles). The name Tsyklon ("cyclone") is relatively recent, appearing for the first time in 1986 when, in the wake of Gorbachev's Perestroika initiative, the Soviets began promoting their launchers for commercial use in the West. "Tsyklon" is the spelling widely accepted in western technical literature, although the name that used to be painted on the side of the rocket is "Ciklon".)

Yangel had proposed basing the first Tsyklon on the R-16 but this vehicle was never developed. Instead the Tsyklon-2 and -3 both evolved from the larger R-36. The Soviet government approved development of the Tsyklon-2 to orbit two types of large military satellite-the IS (Istrebitel Sputnik) ASAT and the US (Upravlenniye Sputnik) naval intelligence satellites. This involved minimal changes to the R-36 because both the IS and US payloads had their own engines for insertion into final orbit. The first flight of the Tsyklon-2 was on Oct 27, 1967, from Baikonur. In the West the rocket became known as F-1-r FOBS (Fractional Orbit Bombardment System).

Its eventual successor, the Tsyklon-3, was a medium-lift three-stage vehicle designed for multiple payload launches of Strela-class satellites and single payload launches of the Tselina-D ELINT (electronic intelligence) and Meteor weather satellites. By using an S5M third stage, the new rocket would have an low-Earth-orbit capacity four 4 tons greater than that of the Tsyklon-2, combined with improved orbital injection accuracy. Later, the Tsyklon 3 was also used to launch AUOS scientific and Okean-O radar satellites.

With the disintegration of the Soviet Union in the early 1990s, the Ukrainian manufacturer of the Tsyklon, ended up in a different country – an unacceptable situation for a rocket intended for launching national security payloads. Consequently, existing stocks of the vehicle were used but no new ones were built.