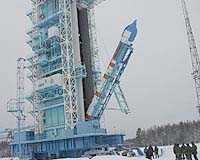 Cosmos-3M launcher with SAR-Lupe satellites atop, prior to launch from Plesetsk.

Cosmos is a family of small two-stage Russian launch vehicles derived from the R-12 and R-14 ballistic missiles (see "R" series of Russian missiles). It stemmed from a government decision in 1960 to develop a means of launching payloads not requiring the more powerful R-7-based (Soyuz-type) boosters. Earlier Cosmos rockets, known as Cosmos and Cosmos-2, consisted of an R-12 first stage and a high-performance second stage that burned a unique liquid oxygen / UDMH propellant combination. These were used to launch Cosmos and Intercosmos satellites until being phased out in 1977. They were superceded by Cosmos-1, Cosmos-3, and Cosmos-3M based on the R-14. The Cosmos-3M, with its restartable second stage, was the most prolific and successful of this line, delivering payloads of up to 1,500 kg into low Earth orbit. Although its production ended in 1995, a number remain in storage.