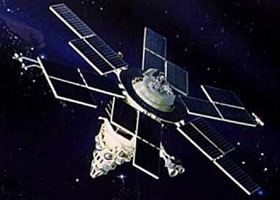 Molniyas are Russian communications satellites; 'Molniya' means 'lightning.' All move in highly elliptical, 12-hour orbits, with perigees (low points) of no more than a few hundred kilometers and apogees (high points) of up to 40,000 km. Such orbits, that have become known as Molniya-type orbits, require less rocket power to achieve than a geosynchronous orbit and are better suited to communications with northern latitudes.

The first flights of the Molniya-1 series, in 1964-65, tested the satellite for use in military command and control. In 1968, a complete constellation of Molniya-1s became operational within the Soviet armed services. This constellation, like that of all subsequent Molniyas, consisted of four pairs of spacecraft with orbits inclined at 90° to one another, replenished as necessary. Flight trials of Molniya-2 took place 1971–74 and operational flights in 1974–77. Molniya-2 was used in the Orbita television system and also for the military Korund communications system. Development of Molniya-2M, later renamed Molniya-3, began in 1972 and flight trials in November 1974. Molniya-3 was used to create the Orbita communications system for northern regions, and later versions were incorporated into the Unified System of Satellite Communications (YeSSS). All Molniya satellites have masses of 1,500–1,800 kg and have been placed in orbit by Molniya 8K78 launch vehicles, mostly from Plesetsk but also from Baikonur.