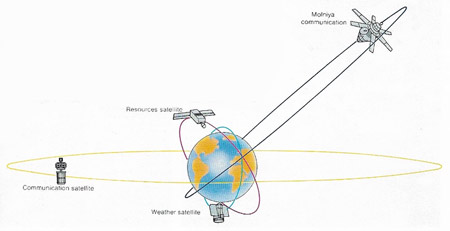 Satellites are put in different orbits according to their function. Earth resources satellites, such as the Landsat series, have low orbits (typically 900 kilometers, 550 miles), to achieve maximum resolution of detail. The Landsats are in polar orbits so that they can scan all parts of the Earth from directly overhead. The Russian Meteor and US NOAA weather satellites follow similar polar orbits. Communications satellites can be further out: the Molniya series reach a distance of 40,000 km (25,000 mi). The best location for a comsat is the geostationary orbit 35,900 km (22,300 mi) out above the equator.

A Molniya-type orbit is a very elliptical, 12-hour orbit, with a high apogee in the northern hemisphere and a relatively low perigee in the southern hemisphere. Soviet Molniyas were the first to be placed in such paths.

Since satellites in Molniya-type orbits move very slowly at apogee, they appear to hover for hours at a time over northern latitudes enabling them to relay for long periods in these locations. In addition, they can see two-thirds of the globe during a complete circuit – much more than a satellite in geosynchronous orbit. The disadvantage is that the sending/receiving dish on the ground must track the satellite, whereas for a geosynchronous satellite a fixed dish can be used. Various American military satellites, including those in the SDS (Satellite Data System) series, have been placed in Molniya-type orbits to spy on the Soviet Union and neighboring territories.