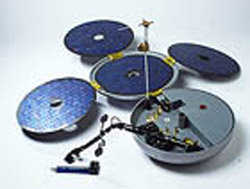 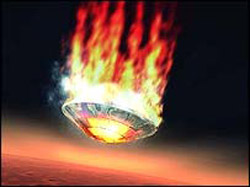 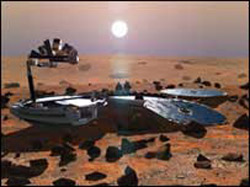 Simulated view of Beagle 2 on Mars. 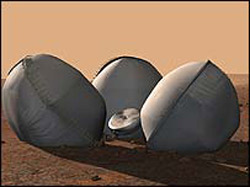 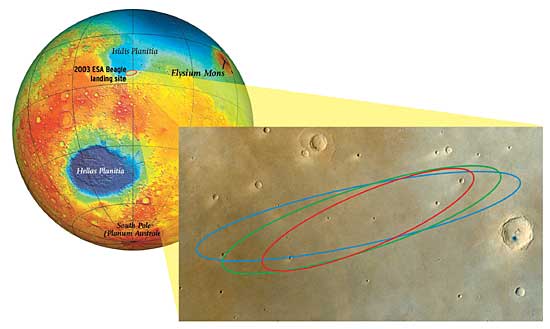 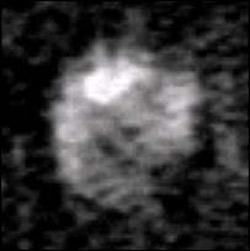 Beagle 2 was a miniature Mars lander, designed and built in Britain (by scientists from the Open University and the University of Leicester in collaboration with Martin-Baker Aircraft and Matra Marconi Space Systems), that rode piggyback aboard the European Space Agency probe Mars Express, launched by a Soyuz-Fregat rocket in June 2003 and scheduled for arrival at the Red Planet in December 2003. No contact with Beagle was ever established after its separation from Mars Express and it is thought to have been lost either during descent through the martian atmosphere or by crashing onto the surface. [For the latest news on the possible fate of Beagle, see the Postscript at the end of this article.]

Beagle 2's primary purpose was to search for life. In fact, it was the first spacecraft with dedicated equipment to look for martian life since the twin Viking landers touched down in 1976. Beagle's destination was Isidis Planitia, a relatively flat basin that may have been formed by sedimentary deposits. This target was chosen because of its likely past association with water (and therefore, possibly, life) and also because, with its gently sloping dunes and lack of major debris, it offered the prospect of a safe landing. Beagle was to have used "hit, bounce, and roll" airbag landing technology to that employed by Mars Pathfinder in 1997. However, whereas Mars Pathfinder had a series of 24 interconnecting airbag spheres, Beagle had only have three. Failure of these airbags is one of the possible reasons for Beagle's demise.

The spacecraft was named after the ship in which Charles Darwin sailed to the Galapagos. Changes in the mission specification meant that the mass of Beagle 2 had to be trimmed from 90 kg to 60 kg, echoing economies that proved necessary on the sailing ship. (So cramped was the accommodation that the ship's padre had to give up his berth so that Darwin could go!)

Beagle 2 carried a a battery of ingenious, tiny instruments to search for organic material on and below the surface of Mars, and to study the inorganic chemistry and mineralogy of the landing site. An onboard mass spectrometer was to have been used to search for organic material, water, and water-deposited minerals in samples obtained by a robot arm and a "mole", known as Pluto, which would have been able to crawl several feet away from or beneath the lander, out to the length of its attached power cord.

Beagle cost a mere $40 million compared with Viking's $1 billion, and weighed less than one tenth of each fully fueled Viking lander. Among its suite of science instruments were the first optical microscope to fly to Mars, as well as a gas analysis package (GAP) that would have put to the test the results of Viking's gas chromatograph-mass spectrometer (GCMS).

Beagle 2's primary science mission was to have lasted 180 martian days, or sols. Although the probe itself couldn't have moved around after landing, it would have been able to obtain and analyze samples of rock and soil from within a 75-cm radius, thanks to a 2.5-kg robotic arm known as the position-adjustable workbench (PAW).

Some of Beagle 2's instruments, including GAP, were housed in the lander's body, while several others were located on the adjustable workbench itself. Stereo cameras built into the PAW would have helped researchers identify suitable soil and rock samples. They would have obtained a number of overlapping stereo images of the landing site, from which a computer on Earth would have constructed a three-dimensional representation of the site. At 0.75 milliradian per pixel, the stereo cameras had 1.3 times the resolution of those on board Mars Pathfinder. Normally they focus from 1.2 m to infinity, but one camera was also equipped with a close-up lens for looking at objects only 10 cm away.

The optical microscope would have allowed even closer visual inspections. Without supplementary lighting, though, samples placed in front of it would have been less than adequately lit because Mars receives, on average, only 43% as much sunlight as Earth. Consequently, the instrument was equipped with 12 light-emitting diodes – three each of red, green, and blue, plus three that emit ultraviolet light. UV might have caused any organisms present to fluoresce, but in any case UV fluorescence is crucial in the identification of some minerals. The microscope would have been focussed by moving the whole instrument back and forth. Its 4–8-micron resolution was too coarse to distinguish individual bacteria but could have detected biofilms – the layers of slime produced by many bacterial colonies – if they had been present. Once the microscope was positioned by the PAW in front of a soil or rock sample, a monochrome charge-coupled device camera would have digitally imaged the sample through the microscope lens. To create color images, it would have used the red, green, and blue LEDs in sequence to illuminate samples with each color in turn. True color images could have been later constructed on Earth by superimposing the separate images.

To obtain soil or rock samples, the PAW was also equipped with a set of digging, drilling, and grinding tools. A subsurface soil sampler called Pluto (PLanetary Underground TOol) would have dug to a depth of about 2 m (the Viking lander robotic arm could scoop no deeper than 20 cm). At the heart of Pluto was a soil penetrator and sampler known as the Mole. Mounted in a metal tube and powered through a tether attached to Pluto, the Mole could have burrowed into soil or rock and captured a 0.24 cm2 sample. After crawling out at most 3 m in any direction, the Mole could have been reeled back into the PAW and positioned over a funnel to release its samples for analysis in the body of the spacecraft.

The decision to include a grinder on the Beagle 2 mission followed on the failure of the Mars Pathfinder Rover's X-ray spectrometer to positively identify rock samples through their coating of martian dust. The PAW's rock corer-grinder and the Mole's sampling tip were designed by T. C. Ng, a Hong Kong dentist and precision toolmaker. Any dust adhering to rock surfaces would have been removed by the corer-grinder, whose rotating chipping bit produced a flat surface 30 mm in diameter. The X-ray and Mössbauer spectrometers built into the PAW could then have been positioned to analyze the pristine rock surface. The corer-grinder could also have sampled the interior of rocks, using a hammering and rotating action to obtain cores about 0.5 cm long. No previous mission to the planet has obtained a sample from within a martian rock. Although NASA is sending similar drilling equipment along with its 2003 Mars Rover mission, it won't land on Mars until Jan 2004, whereas the Beagle 2 would have arrived around Christmas 2003.

Apart from the possibility that the microscope would have provided direct visual evidence of biofilms or fossils, the most promising instrument for confirming life's isotopic signature was the gas analysis package. This instrument was three times as sensitive as the Viking's GCMS. If it had detected any organic molecules in the soil or atmosphere, whether biological in origin or not, it would have compelled a significant reworking of our understanding of the Red Planet's chemistry.

Among the gases the package could detect were hydrogen, nitrogen, oxygen, and carbon dioxide. It used a method known as stepped combustion, in which gas is incrementally extracted from samples over a series of temperature intervals and passed into a mass spectrometer. The underlying principle is that a living creature's metabolism leaves isotopic signatures in four kinds of materials: organic carbon, carbonates, sulfates, and sulfides. Metabolic reactions that process these substances utilize lighter isotopes than do nonliving processes. The relative amounts of isotopes measured in a sample can then be compared with those in surrounding inorganic rocks found by the Beagle 2 spectrometers – an increase in lighter isotopes in the sample relative to the inorganic rocks would offer evidence of life on Mars. The gas analyzer would have operated in one of two ways: either by direct atmospheric sampling, or by using samples gathered by the subsurface soil sampler, Pluto, and fed into one of 12 sample ovens mounted on a rotating carousel. Whatever form the carbon took, the package would have been able to measure it in nanogram quantities. Beagle 2 also carried environmental sensors to measure UV radiation, temperature, atmospheric pressure, wind speed and direction, and the momentum and amount of atmospheric dust.

If Beagle 2 had found evidence for either extant or extinct life on Mars, it would surely have ignited a debate over priority of the discovery. NASA has insisted for over a quarter of a century that the Viking landers found no life on Mars, but within the last two years has been reevaluating both the GCMS findings and the Viking biology experiment known as labeled release. Labeled release used a radioactive isotope, carbon-14, to test for metabolic activity of micro-organisms in the soil. Nine soil samples were moistened with a nutrient labeled with the isotope. Each sample was then incubated for up to 10 days, time enough for any micro-organisms present to consume the nutrient and produce gases detectable by the rise in radioactivity level. Gilbert Levin, principal investigator for the Viking labeled release experiment, insists that the results from his experiment on Mars looked very much like results his team obtained in our Earth tests with California Death Valley soils and their cargo of bacteria.


Postscript: The remains of Beagle?

December 19, 2005: Colin Pillinger, the chief scientist behind the Beagle 2 mission, announced that the craft may have been found in specially processed pictures of the martian surface acquired by Mars Global Surveyor. The images appear to show that the spacecraft came down in a crater close to the planned landing site. Evidence for this conclusion includes a lot of disturbance in the crater, particularly a big patch on the north crater wall which may be the primary impact site. There are also other features around the crater consistent with the airbags bouncing around and finally falling down into the middle. Four roughly circular features to the right of the airbags could conceivably be Beagle's unfolded solar panels. Mars Reconnaissance Orbiter spacecraft, which will photograph Mars in unprecedented detail once it reaches the planet next year, could confirm the tentative identification.