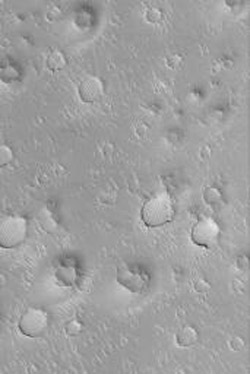 Isidis Planitia is a vast, nearly circular plain on Mars centered at 12°N, 273°W. Its circular shape has led researchers to suspect that it is the site of a very ancient, highly eroded basin formed by asteroid or comet impact when the planet was still very young. This Mars Global Surveyor (MGS) Mars Orbiter Camera (MOC) image shows a 3 km (1.9 mi) wide view of a typical Isidis Planitia scene.

All over Isidis Planitia are found craters, ripple-like, light-toned, windblown dunes, and rugged mounds with summit pits. The mounds with summit pits might mark the location of impact craters that formed in a layer of material that used to cover much of Isidis Planitia, but has been largely stripped away, leaving the floors of former impact craters standing high upon remnants of this formerly more extensive layer. This example is located near 18.2°N, 272.5°W, and is illuminated by sunlight from the lower left. Isidis Planitia had been the chosen landing site for Beagle 2.