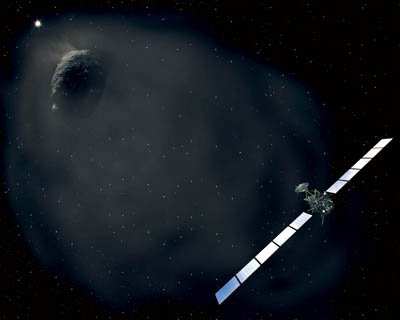 Rosetta is an ESA (European Space Agency) spacecraft, launched on 2 March 2004, that rendezvoused with comet 67P/Churyumov-Gerasimenko in 2014. Along the way it flew past two asteroids: Steins, only a few kilometers across, in September 2008, and Lutetia, 100 km wide, in July 2010. The Steins rendezvous took place on 5 September 2008 at a distance of just over 1,700 km. This encounter was conducted at a relatively low speed of about 9 km/s during Rosetta's first excursion into the asteroid belt. The Lutetia pass occurred at a distance of about 3,000 km on 10 July 2010 at a speed of 15 km/s. This was during Rosetta's second passage through the asteroid belt.

The mission's main goal was to meet up with the 4-km-wide comet Churyumov-Gerasimenko in early 2014. At this time, the comet was cold and inactive, and Rosetta will be able to release a washing-machine-sized lander, called Philae, on to the object's surface. The orbiter and lander then recorded changes in the comet as it hurtles in towards the Sun at speeds up to 135,000 km/h.

Rosetta had originally been scheduled for launch in January 2003 and to rendezvous with comet Wirtanen in 2011. En route it was to have flown past asteroids Otawara in 2006 and Siwa in 2008. However, missed its original launch window because of concerns over its Ariane V launch vehicle (a different version of which had failed on the previous flight).