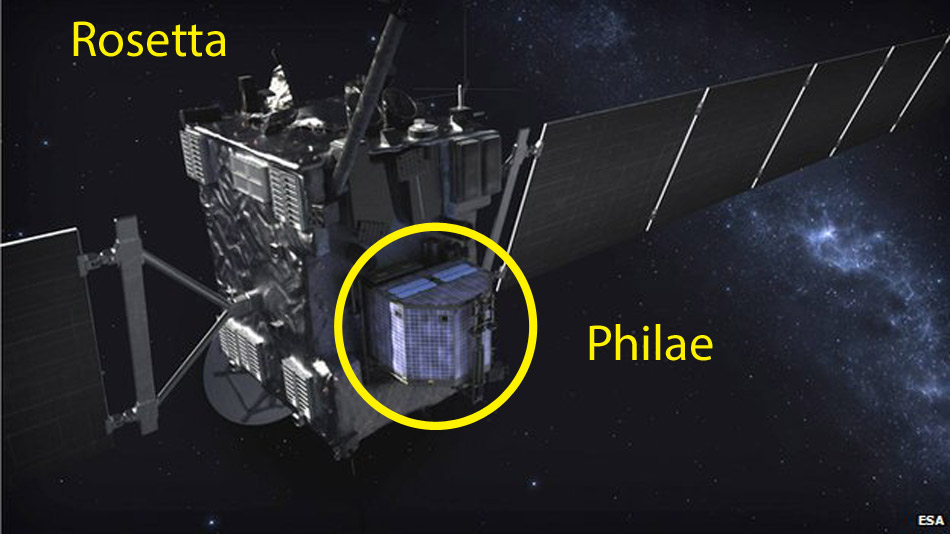 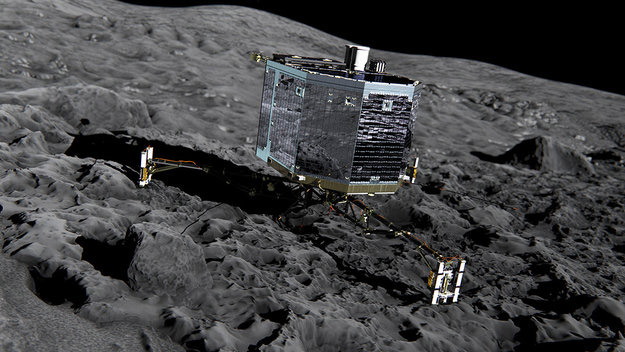 Philae on the surface of Comet 67P/Churyumov-Gerasimenko. Artwork credit: ESA.

Philae is a 100-kg lander that rode piggy-back on the European Rosetta spacecraft, which rendezvoused with Comet 67P/Churyumov-Gerasimenko in Aug 2014 and is currently go in orbit around it. On 12 November, after a period of mapping by Rosetta, Philae self-ejected from the main craft and unfolded its three legs, ready for a gentle touchdown at the end of the ballistic descent. Immediately after touchdown, a pair of harpoons were supposed to fire to anchor the lander to the surface and prevent it escaping from the comet's extremely weak gravity. In the event, the comet initially struck the comet within 100 m of the chosen target point. However, the harpoons failed to fire and the craft bounced away from the comet on a trajectory that lasted for about two hours and carried it laterally about 1 kilometer from the first landing site. Upon making contact for a second time, it rebounded at about 2 cm/s, bouncing up for about 7 sec before landing and staying put the third time.

The lander appears to be partially shaded by a rock or cliff so it is getting less sunlight than it needs to keep its batteries fully charged. Two legs are touching the surface, and one is off the surface. Most of the scientific instruments are working well and collecting data. There may be a way to "hop" it into a sunnier spot, but until its location and orientation are fully understood, the lander will stay where it is. Much of the science data desired will probably be gathered.

The minimum mission target is one week, but surface operations may continue for many months.

The lander structure consists of a baseplate, an instrument platform, and a polygonal sandwich construction, all made of carbon fiber. Some of the instruments and subsystems are beneath a hood that is covered with solar cells.

An antenna transmits data from the surface of the comet to Earth via the Rosetta orbiter. The lander carries nine experiments, with a total mass of about 21 kilograms. It also carries a drilling system to take samples of subsurface material.