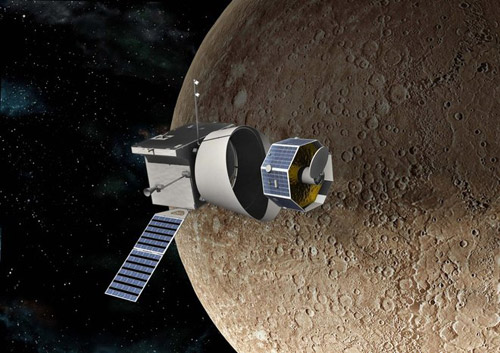 BepiColombo is a joint European Space Agency (ESA) and Japanese Space Agency (JAXA) mission to explore Mercury that will consist of two orbiters: a planetary orbiter with a mass of 450 kg and a magnetospheric orbiter, with a mass of about 30 kg. An originally-planned lander that was also to have formed part of the mission was cancelled in 2003 due to budget constraints.

BepiColombo is scheduled for launch in 2017 and arrival at Mercury, via several gravity assists, some time between 2020 and 2023. It is named after Giuseppe Colombo, of the University of Padua, who first suggested how Mariner 10 (the first probe to fly past Mercury) could be placed in an orbit that would bring it back repeatedly to the innermost planet.

ESA will produce the Mercury Planetary Orbiter (MPO) that will be equipped with 11 scientific instruments. Flying in a polar orbit, it will study Mercury for at least a year, imaging the planet's surface, generating height profiles, and collecting data on Mercury's composition and extremely thin atmosphere.

JAXA will be responsible for the Mercury Magnetospheric Orbiter (MMO), which will explore the planet's magnetic field with its five on-board instruments.