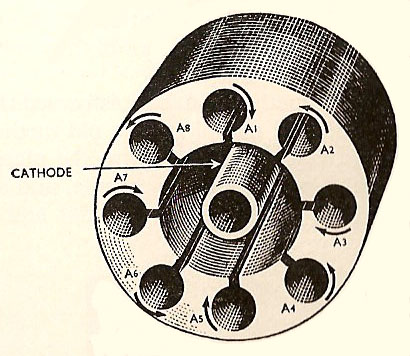 Diagram of an early cavity magnetron.

A cavity magnetron is a type of vacuum tube or valve in which the electrons emitted by the cathode are subjected to a magnetic as well as an electric field. As the electrons are carried round in the magnetic field they sweep by a series of oscillatory circuits and maintain oscillations in them, which are sources of microwaves (short wavelength radio waves). Though small and delicate, cavity magnetrons give pulses of hundreds of kilowatts of energy for about a millionth of a second, without destroying them, just as it is possible to get brilliant flashes from an electric light if subjected to over-voltage for a very short interval.

Cavity magnetrons lied at the heart of microwave ovens and radar. In fact it was the need to come up with a compact, reliable, high-resolution radar system, capable of generating pulses of radio waves less than 50 cm long, in World War II that spurred the development of this device.

Back in the 19th century, Heinrich Hertz had found that a circular loop of wire with a gap in it could detect the presence of radio waves. The waves induced a current in the loop, and caused a spark to jump the gap. Critically, the wavelength detected was always 7.94 times the diameter of the loop.

Prior to the Second World War the device known as a magnetron was merely an evacuated space, surrounded by a copper block, through which ran a heated wire. A powerful magnetic field was applied to the space. When an electric potential was applied between the central wire and the surrounding block, electrons traveled through the space towards the block. The magnetic field made the electrons swirl around, shedding energy in the form of radio waves, but the power output was small, and wavelengths variable.

Physicists Harry Boot and John Randall worked with the group that was trying to develop an improved coastal defense system for Britain. The one in operation in 1939, called Chain Home, used 300-ft antennas and long radio waves, and was cumbersome, vulnerable and unreliable. It could not see low-flying aircraft, and it could be jammed. Because of its great size, it was tied to the ground. Better resolution was needed, and a system compact enough to be carried in aircraft. These objectives could only be realized by rapid pulsing of the signal, and the use of short wavelengths – less than 50 centimeters.

Randall had his insight while working alongside Boot at the University of Birmingham. It was to drill cavities into the copper block of an existing magnetometer, communicating the central space by slits. These were three-dimensional versions of Hertz's wire loop. Just as the wire loop detected specific wavelengths according to its diameter, the cylinders would be drilled to the right diameter to "tune" the wavelength of the microwaves emitted. Randall and Boot were aiming for wavelengths of 10 cm. Taking Hertz's ratio of 7.94, they divided it into 10 cm – and arrived at a figure of 12 mm.

Boot and Randall set up their machine under the floor of a lecture theater. The cavity was kept evacuated by continuous pumping. The vacuum seals consisted of two halfpennies held on with wax. Finally, on Feb 21, 1940, the first cavity magnetron went into account.

It was immediately obvious that considerable radio power was being emitted. Neon lamps some distance away glowed in the field of radio waves. Cigarettes could be lit from the output lead which conducted the waves and – in the first example of microwave cooking – the hand holding the cigarette became uncomfortably warm.

These early magnetrons tended to switch suddenly from one frequency to another – an effect analogous to the way a length of tubing can have several resonant frequencies. This problem was solved by another Birmingham physicist, James Sayers, who stabilized the resonance by connecting alternate tuning cylinders together with copper wire. By 1945, cavity magnetrons were emitting stable frequencies at up to 3.5 million watts.