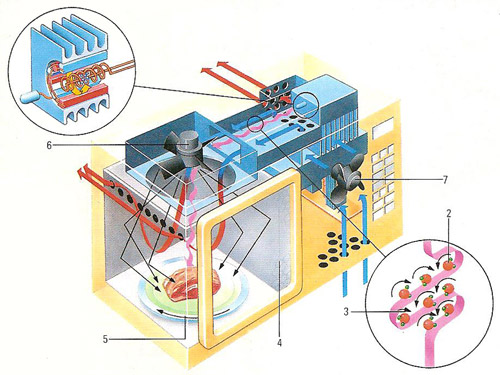 Microwave radiation is electromagnetic radiation with wavelengths between 30 cm and 1 mm, corresponding to frequencies between 1,000 megahertz (MHz) and 300,000 MHz (1GHz to 300 GHz). Microwaves occupy that portion of the electromagnetic spectrum between short-wave radio waves and infrared radiation.

Microwaves are used today for such purposes as radar, radio and television broadcasting, cellular telephones, and microwave heating.

A microwave oven (Fig 1) exploits the presence of water in food to cook things from the inside. A microwave oven generates microwaves in a magnetron (1). When the microwaves penetrate the food, they cause water molecules (2), which have a positive side and a negative side, to rotate (3) generating heat through friction with the food. The oven is heavily insulated (4) to prevent leakage of microwaves. A rotating plate (5) and paddles (6), which ensure an even distribution of microwaves and that the food cooks evenly. To dissipate the hot air, generated by cooking and by the magnetron, a fan (7) pushes cold air around the oven.

The microwave window is the frequency band between 1,000 and 10,000 megahertz (MHz). This is the favored portion of the electromagnetic spectrum to search for signals that might originate from extraterrestrial civilizations because the background noise (static) due to natural celestial sources is minimal at such frequencies.