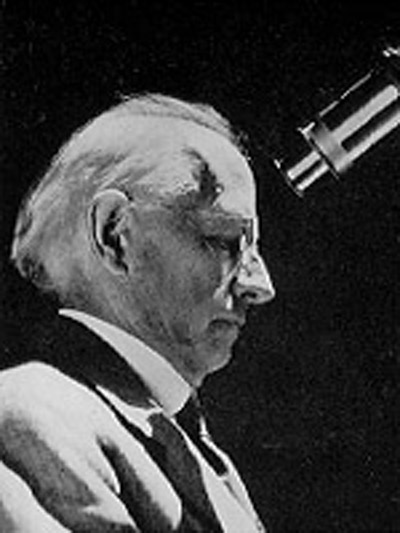 Henry Russell was an American astronomer who, independently of Ejnar Hertzsprung, realized the relationship between a star's temperature (color) and its brightness, and designed a diagram illustrating this relationship in 1913, later called the Hertzsprung-Russell diagram.

Russell spent six decades at Princeton University – as student, professor, observatory director (1912–47), and active professor emeritus. From 1921 on he also made lengthy annual visits to Mount Wilson Observatory. He measured parallaxes in Cambridge, England, with A. R. Hinks and found the correlation between spectral types and absolute magnitudes of stars that is partly named after him. He popularized the distinction between giant stars and dwarfs while developing an early theory of stellar evolution. With his student, Harlow Shapley, he analyzed light from eclipsing binary stars to determine stellar masses. Later he and his assistant, Charlotte Moore Sitterly, determined masses of thousands of binary stars using statistical methods. With Walter Adams, Russell applied Meghnad Saha's theory of ionization to stellar atmospheres and determined elemental abundances, confirming Celia Payne-Gaposchkin's discovery that the stars are composed mostly of hydrogen. Known as the "Dean of American astronomers," Russell was a dominant force in the community as a teacher, writer, and advisor.

In the 1920s, Russell was persuaded by the Jeans-Jeffreys tidal hypothesis to affirm that planetary systems are "infrequent" and inhabited planets "matters of pure speculation." Two decades later, however, on the back of independent claims by Frank Schlesinger at Yale and Kaj Strand at the Sproul Observatory of the discovery of planetary systems around two nearby stars (later demonstrated to be unfounded), he declared that it was time to reverse this view and consider that there may be a very large number of extrasolar worlds.1 Regarding our planetary neighbors, Russell, in the 1920s and '30s, considered Venus almost certainly non-biological but Mars the possible abode of vegetation and other low forms of life.