In the Jeans-Jeffreys tidal hypothesis, the Sun (A) is approached by another star (B), which pulls a tongue of matter off the solar surface After the wandering star recedes, the tongue of matter breaks up into drops which form planets revolving around the Sun. Jupiter, the largest planet, is in the position of the thickest part of the cigar-shaped tongue. 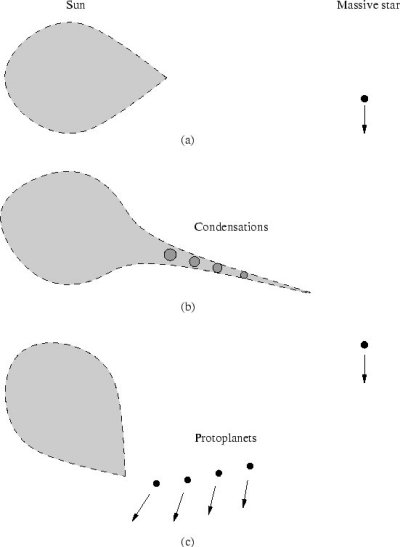 (a) A tidal bulge is induced.

(b) A filament of material is drawn out in which condensations form.

(c) The produced protoplanets orbit the Sun with high eccentricities.

The Jeans-Jeffreys tidal hypothesis, championed by James Jeans and Harold Jeffreys, explained the origin of the solar system as a result of a close encounter between the Sun and a second star. However, it differed significantly from the other major catastrophic hypothesis of the twentieth century, the Chamberlin-Moulton planetesimal hypothesis.

As a result of a detailed mathematical analysis, Jeans concluded in 1916 that the tidal interaction between the Sun and a passing star would raise tides on the Sun resulting in the loss of a single cigar-shaped filament of hot gas, rather than separate streams of gas as in the Chamberlin and Moulton scenario. This hot gas would then condense directly into the planets instead of going through a planetesimal stage. The central section of the "cigar" would give rise to the largest planets – Jupiter and Saturn – while the tapering ends would provide the substance for the smaller worlds.

This model had important repercussions for the possibility of life elsewhere in the universe because if planetary systems came about only as a result of freak stellar encounters, there would be relatively few extrasolar worlds to provide biological platforms. In his 1923 lecture "The Nebular Hypothesis and Modern Cosmogony", Jeans said:

"Astronomy does not know whether or not life is important in the scheme of things, but she begins to whisper that life must necessarily be somewhat rare."

By the late 1920s, this opinion was shared by many astronomers. However, in 1935, Henry Norris Russell raised what would become fatal objections to the Jeans-Jeffreys hypothesis. He pointed out that it was hard to see how a close stellar encounter could leave the Sun, which is a thousand times more massive than the planets, with such a tiny share of the solar system's angular momentum. Furthermore, he could not understand how the planets could condense out of hot material ejected from the Sun. The former objection was put into stronger form by Russell himself in 1943, while the latter was strengthened by Russell's student, Lyman Spitzer, in 1939.