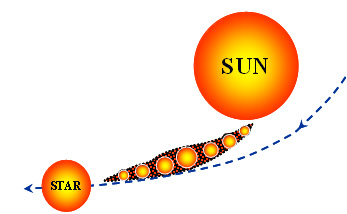 The Chamberlin-Moulton planetesimal hypothesis is a catastrophic hypothesis, proposed by Thomas Chamberlin and Forest Moulton in 1905, in which the planets of the Solar System are seen to arise from an encounter between the Sun and another star.

In this scenario, the gravity of the passing star tears a succession of bolts from the solar surface. Bolts coming from the side nearer the star are thrown out to distances comparable with those of the giant plants, while those from the far side of the Sun are ejected less violently to the distances of the terrestrial planets. From the inner remains of these bolts formed the initial cores of the planets. The outer parts expanded and cooled into a huge swarm of solid particles spread out in a disk rotating about the Sun in a plane determined by the motion of the passing star. The cores gradually grew into planets by gathering in the planetesimals, most of the growth taking place in the outer parts of the Solar System where material was more plentiful.

Eventually it became clear that, like other variants of the encounter idea, not enough angular momentum could be conveyed to the ejected material to explain the state of the Solar System as it exists today.