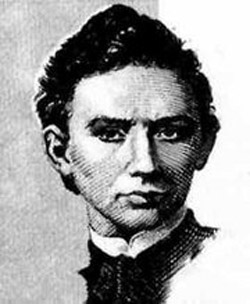 János Bólyai was a Hungarian mathematician who was one of the founders of non-Euclidean geometry, independently coming to almost the same conclusions as Nikolai Lobachevsky. He was initially taught by his father, Farkas, also a mathematician, then studied at the Royal Engineering College in Vienna from 1818 to 1822. Between 1820 and 1823 he prepared his treatise on a complete system of non-Euclidean geometry, commenting "Out of nothing I have created a strange new universe." It was published in 1832 as an Appendix to an essay by his father. Carl Gauss, on reading the Appendix, wrote to a friend saying "I regard this young geometer Bólyai as a genius of the first order." It was not until 1848 that Bólyai learned that Lobachevsky had produced a similar piece of work in 1829. Although he never published more than the 24 pages of the Appendix, Bólyai left more than 20,000 pages of manuscript of mathematical work when he died. He was an accomplished linguist, speaking nine foreign languages including Chinese and Tibetan.