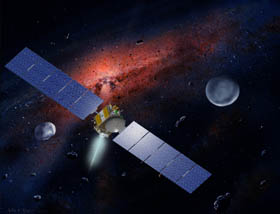 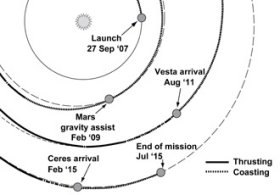 Dawn is a NASA probe designed to explore the dwarf planet Ceres and the second largest asteroid, Vesta. Dawn was originally scheduled for launch in June 2006, was cancelled in March 2006 for budgetary reasons, but was then reinstated and finally launched on September 27, 2007, by a Delta II rocket from Cape Canaveral Air Force Station.

Dawn arrived at Vesta and went into orbit around it on July 15, 2011. It remained around Vesta for more than a year before firing its ion engines just over a year later and setting course for a rendezvous with Ceres in 2015. A web video celebrating Dawn's "greatest hits" at Vesta is available at this NASA webpage.

The probe's instruments are designed to measure the exact mass, shape, and spin of Vesta and Ceres from orbits 100 to 800 km high, record their magnetization and composition, use gravity and magnetic data to determine the size of any metallic core, and use infrared and gamma-ray spectroscopy to search for water-bearing minerals. Flybys of more than a dozen other asteroids are planned along the way.

Dawn carries three science instruments: a visible camera, a visible and infrared mapping spectrometer, and a gamma-ray and neutron spectrometer. In addition to these instruments, radiometric and optical navigation data will provide data relating to the gravity field and thus bulk properties and internal structure of the two bodies.

Dawn is equipped with three 30-cm-diameter (12-in) ion thrust units (called XIPS), each movable in two axes to allow for migration of the spacecraft's center of mass during the mission. This also allows the attitude control system to use the ion thrusters to help control spacecraft attitude.

A total of three units are needed to provide enough thruster lifetime to complete the mission and still have adequate reserve. However, only one thruster will be operate at any given time. Dawn will use ion propulsion for years at a time, with interruptions of only a few hours each week to turn to point its antenna to Earth. Total thrust time through the mission will be about 2,100 days, well in excess of Deep Space 1's 678 days of ion propulsion operation.

At maximum thrust, each engine produces a total of 91 millinewtons – about the amount of force involved in holding a single piece of notebook paper in your hand. At maximum throttle, it would take Dawn's system four days to accelerate from 0 to 60 mph. As slight as that might seem, over the course of the mission the total change in velocity from ion propulsion will be comparable to the push provided by the Delta II rocket that carried it into space – all nine solid-fuel boosters, plus the Delta's first, second and third stages. This is because the ion propulsion system will operate for thousands of days, instead of the minutes during which the Delta performs.