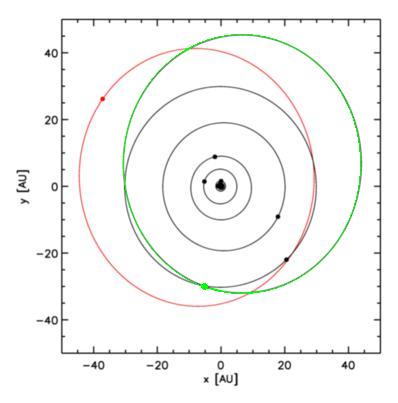 Orbits of Orcus (red), Pluto (green), and other planets compared.

90482 Orcus is one of the largest known Kuiper Belt objects (KBOs). It was initially and provisionally known as 2004 DW. The name Orcus, from a Roman god of the dead and another name for the Greek deity Hades, was approved by the International Astronomical Union (IAU) on November 22, 2004. It was chosen because Orcus moves in an orbit similar to that of Pluto.

Orcus was discovered in images taken on February 17, 2004 (nearly 74 years to the day after Pluto was found) by Mike Brown (CalTech), Chad Trujillo (Gemini Observatory), and David Rabinowitz (Yale) – the same team that discovered the largest known KBO, Eris (formerly called 2003 UB313). The diameter of Orcus has been put at about 1,600 km (compared with Pluto's 2,300 km) but this is only an estimate because of uncertainty in the object's albedo (reflectivity). Orcus moves in an orbit similar to that of Pluto, i.e. it completes three orbits of the Sun for every two of Neptune goes around the sun. It is therefore classified as a plutino.

Under new guidelines being considered by astronomers for what constitutes a planet, Orcus may be elevated to the status of a dwarf planet if it turns out that its shape is approximately spherical.