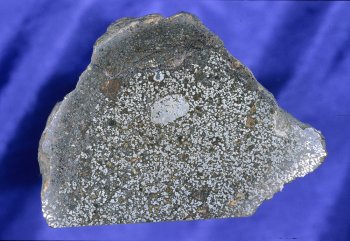 A mesosiderite that fell near Hainholz, Germany. This cut and polished face of the Hainholz meteorite, which is about 9 cm from left to right, reveals the complex mixture of metal and pyroxene typical of mesosiderites. Photo by D. Ball, ASU.

Mesosiderites is one of two main types of stony-iron meteorite, the other being pallasites. The name 'mesosiderite' comes from the Greek mesos for 'middle' or 'half,' and sideros for 'iron' and reflects the fact that these meteorites are roughly equal mixture of differentiated silicates and iron-nickel. The silicates are heavily-brecciated (smashed-up), evolved igneous rocks similar to those found in members of the HED group. Evidently, these silicates came from the crust of an achondritic parent body. The iron-nickel in mesosiderites, on the other hand, looks like the metal in group IIIAB iron meteorites, and shows every sign of having derived from the core of a completely different asteroid than that which spawned the silicates. One possible explanation of the origin of mesosiderites is that a collision took place between two differentiated asteroids in which the still-liquid core of one asteroid mixed with the solidified crust of the other. Subsequently, at least one of the asteroids reassembled from the collision fragments and became the mesosiderite parent body. It remains uncertain whether the HED parent body, Vesta, is one of the asteroids involved.

Although more than 80 mesosiderites have been found, only seven of these were witnessed falls. The most recent occurred at Dong Ujimqin Qi in China, on Sep 7, 1995, and involved three large fragments with a total mass of 129 kg. The fall of the Estherville mesosiderite in Iowa, took place on May 10, 1879. A brilliant fireball was followed by a shower of several large masses and numerous small ones, weighing a total of 320 kg. Other observed falls occurred at Lowicz, Poland (Mar 12, 1935), Barea, Spain (1842), Veramin, Iran (1880), Dyarrl Island, Papua New Guinea (1933), and Patwar, India (1935).