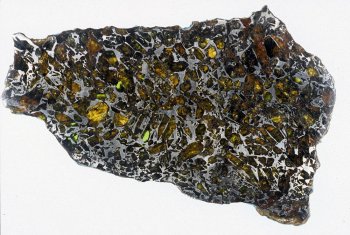 A specimen of a pallasite that fell near Albin, Wyoming. This slice, which is about 18 cm long, has been illuminated from behind to distinguish its olivine from the surrounding metal. Photo by D. Ball, ASU.

A pallasite is a member of one of two main classes of stony-iron meteorite, the other being mesosiderites. Pallasites are igneous in nature and characterized by crystals of olivine, often peridots (clear, green olivine crystals of gem quality), embedded in a matrix of iron-nickel.

The type specimen, weighing 680 kg, was found in the mountains near Krasnojarsk, Siberia, and first documented by the German naturalist Peter Pallas in 1772, though it was some decades later before the extraterrestrial nature of what became known as the Pallas iron was realized.

Pallasites are believed to have come from the core/mantle boundary of differentiated asteroids that were broken apart by impact. In most cases, they have chemical, elemental, and isotopic features that link them to specific chemical groups of iron meteorites, suggesting that they come from the same parent bodies as these irons.