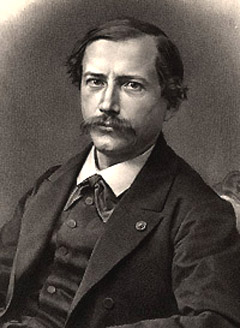 Pierre Berthelot was a French chemist and statesman, born in Paris, who was a pioneer in the synthesis of organic compounds and in thermochemistry. At an early age, Berthelot made a special study of acids and fermentation, and was appointed professor of organic chemistry in the Ecole de Pharmacie in 1859, and in the College de France in 1865. In 1876 he was named inspector-general of education, in 1886–87 he was minister of public instruction, and in 1895 foreign minister.

His work laboratory synthesis of compounds such as ethyne (acetylene), ethanol, methanol, benzene, and methane helped to prove that the distinction between organic substances (as substances formed only in living things) and inorganic compounds wrong. He thus not only opened up a new field of research but was also of great benefit to industry. His early studies established the theory of polyatomic alcohols, and he devoted much attention to explosives. Later in his career, in the 1860s, his observations of the heat phenomena which produce chemical combinations laid the foundation of thermochemistry; he introduced the terms "exothermic" and "endothermic."

In 1868, Berthelot analyzed samples of the Orgueil meteorite and reported finding in them hydrocarbons of the alkane family "comparable with the oils of petroleum."