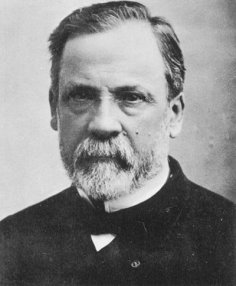 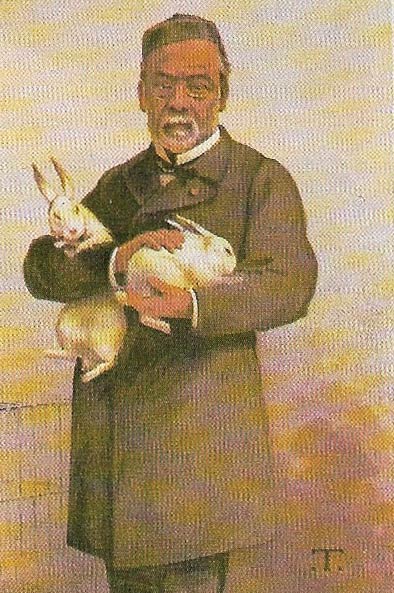 This illustration of Louis Pasteur is from a cartoon published in Vanity Fair in 1887. Pasteur worked on fermentation, on the souring of milk, on putrefaction and then on a disease in silkworms. He showed that all were due to the presence of microorganisms and proved that these were airborne. He then studied other animal diseases and devised a method of immunization by inoculating a toxin to raise the host's resistance to more virulent types of the organism.

Louis Pasteur was a great French chemist who helped found the sciences of microbiology and immunology and expounded the germ theory of disease. In his early pioneering studies of stereochemistry he discovered optical isomerism (see optical activity). His attentions then centered around fermentation, in which he demonstrated the role of microorganisms.

Pasteur's famous experiments on putrefaction (decay), carried out in 1862, finally disproved the ancient theory of spontaneous generation. To address the criticism leveled at Spallanzani's early experiments, namely that boiling might destroy some "vital principle" in air, Pasteur devised a long swan-necked flask. Air could reach the flask through the opening but dust particles and microorganisms could not, because the curved neck served as a trap. Pasteur placed some broth in the flask, attached the swan-neck, boiled the broth until it steamed (to kill any microorganisms in the neck as well as in the broth), and waited to see what happened. The broth remained sterile, demonstrating that there was no vital principle in air. Scientists now faced the problem of explaining how, if spontaneous generation was wrong, life could originate (see origin of life).

The most straightforward way to stop food from decaying and to keep it safe for human consumption is to heat it. Pasteur developed this method, important in its application to milk. The well-known process of pasteurization was later named in his honor.

In later experiments Pasteur noted that, just as fermentation is caused by certain living organisms, so many diseases also depend on the presence of their own particular germs. In 1880, while investigating fowl cholera, he discovered that he could render birds immune to the disease by inoculating them with a weakened germ.

Five years later, in 1885, Pasteur's method of inoculating found its greatest test. He had been investigating the disease rabies, or hydrophobia. At this time a young boy called Joseph Meister came to Paris, where Pasteur was working, covered in bites from a rabid dog. Had he not been treated Meister would certainly have died. Pasteur used his method of inoculation on the boy (the first time he had used it on a human being) and Meister recovered completely.