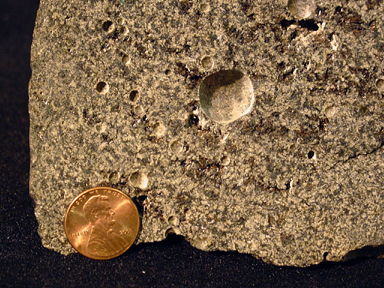 Angrite is a type of basaltic achondrite that crystallized from a molten state a mere 11 million years or so after the condensation of the solar nebula itself. Only about half a dozen examples are known. They are named for the 1.5-kg Angra dos Reis meteorite, which fell in Rio de Janeiro, Brazil (22° 58' S, 44° 19' W) in Jan 1869. The rareness of the group is illustrated by the fact that the next angrite, LEW86010, was not found until 1979, in the Lewis Cliff region of Antarctica.

With an age of some 4.556 billion yr, angrites are the most ancient igneous rocks known. They consist mainly of plagioclase and clinopyroxene, and smaller amounts of very-calcium-rich olivine. They differ from eucrites, which are also achondritic basalts, in terms of mineral chemistry, mineralogy, texture, shock and metamorphic history, and age.

Phase equilibrium studies have shown that the melts from which angrites crystallized could not have come from the melting of an early asteroid that had the kind of proportions of refractory elements (such as aluminum, calcium, magnesium, an silicon) found in chondrites. Rather, the angrite parent body must have been enriched in calcium and aluminum, which implies that it was enriched in the high-temperature fraction of condensation.

Some angrites, including D'Orbigny (found in the south of Buenos Aires Province, Argentina, in 1979), contain numerous small vesicles up to a couple of centimeters across. These cavities may be relic gas bubbles that formed before the rock crystallized, or they make have started out as solid spheres that became separated from the crystal phase during later stages of rock formation.