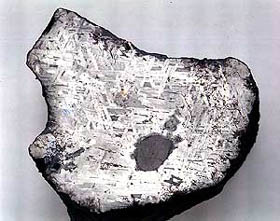 An octahedrite is the commonest type of iron meteorite. Octahedrites are composed mainly of the nickel-iron minerals taenite and kamacite and are named for the octahedral (eight-sided) shape of the kamacite crystals. When sliced, etched with a weak acid, and polished, octahedrites show a characteristic Widmanstätten pattern. Triangular-shaped gaps between larger kamacite and taenite crystals are often filled by a fine-grained mixture of kamacite and taenite called plessite (from the Greek word for "filling"). Classification of octahedrites is based on the width of the kamacite lamellae and each subgroup corresponds to a particular chemical group of iron meteorites.