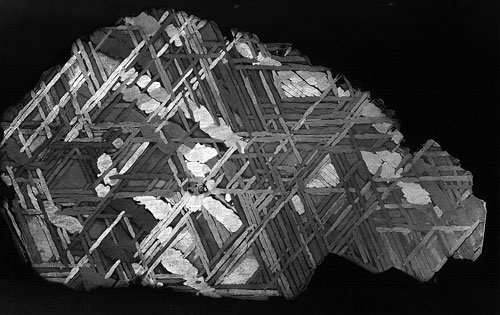 A Widmanstätten pattern is a characteristic cross-hatched pattern that becomes visible on the surface of octahedrites (the commonest type of iron meteorites) and pallasites after polishing and etching with nital (nitric acid in solution with ethanol). It is due to an intergrowth of crystals of nickel-rich taenite and nickel-poor kamacite.

The crystalline arrangement responsible for the pattern formed on the parent asteroid of the meteorite as the core of the asteroid cooled down over millions of years. The formation of nickel-poor kamacite proceeds by diffusion of nickel in the solid alloy at temperatures between 700 and 450 °C, and can only take place during very slow cooling, about 100 to 10,000 °C per million yr, with total cooling times of 10 million years or less. This explains why this structure cannot be reproduced in the laboratory.

The Widmanstätten pattern is named after its discoverer, the Austrian mineralogist Alois von Beckh Widmanstätten (1754–1849), who observed them in 1808.