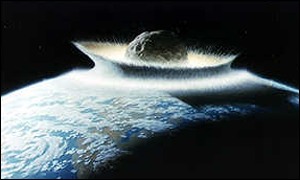 An inevitable corollary of the birth of planetary systems is the formation of numerous smaller objects, including asteroids and comets, and the collision between some of these bodies and larger, possibly life-bearing worlds. Thus any comprehensive model of the origin and evolution of life must factor in the possible consequences of such collisions. During the early, intense bombardment phase of a new solar system, numerous, large-scale impacts may preclude the development of life or force it to take place well below the surface of a planet where there is some protection (see Earth, early history). Impacts may also result in the transference of prebiotic or biological material between worlds (see ballistic panspermia). Later in the course of a planet's development, occasional collisions with objects at least several km across may dramatically influence the course of biological evolution by wiping out many species or entire genera (see mass extinctions) but, at the same time, providing the opportunity for other categories of organisms to flourish. Such appears to have been the case at the Cretaceous-Tertiary Boundary when, apparently in the wake of an asteroid impact, the mammals, and ultimately humankind, filled the ecological void left by the demise of the dinosaurs and their kin.