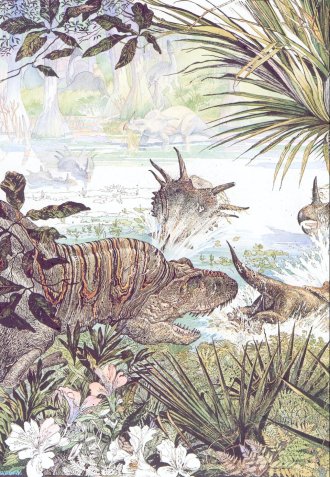 The Cretaceous period was the final period of the Mesozoic era, spanning the time between the end of the Jurassic period, about 144 million years ago, the beginning of the Cenozoic era, about 65 million years ago . It was the last part of the Age of Dinosaurs, although it did see the appearance of new kinds of dinosaurs, including the ceratopsian and pachycepalosaurid groups. Also from the Cretaceous have been found the first fossils of many insect groups, modern mammal and bird groups, and the first flowering plants.

The breakup of the world-continent Pangea, which began during the Jurassic, continued into the Cretaceous. This led to increased regional differences in floras and faunas between the northern and southern continents.

The end of the Cretaceous brought the end of many previously successful and diverse groups of organisms, such as non-avian dinosaurs and ammonites. The mass extinction at the Cretaceous-Tertiary boundary cleared the way for those groups that had previously taken secondary roles to come to the forefront.

The Cretaceous-Tertiary boundary is a major stratigraphic boundary on Earth that marks the end of the Cretaceous period and of the Mesozoic era and the start of the Tertiary period and of the Cenozoic era. The Cretaceous-Tertiary boundary, also known as the K-T boundary (because the Cretaceous is traditionally represented by K), occurred about 65.5 million years ago and coincides with a mass extinction in which the last of the dinosaurs and two-thirds of all other species on Earth died out. The K-T Boundary is marked in many places by a distinctive layer of clay, often highly enriched in elements such as iridium and osmium relative to the layers above and below.

Following the discovery of this layer, by a team including the American physicist Luis Alvarez and his son geologist Walter Alvarez, the Alvarez's and their colleagues theorized that the sediment had come about because of a collision between the Earth and an asteroid (see cosmic collisions, biological effects). The unusual iridium enrichment was consistent, they pointed out, with this elements having an extraterrestrial origin. Initially, many paleontologists were skeptical of this explanation. Among the counter-arguments was that there had been a gradual decline in many types of fauna and flora throughout the Cretaceous – the number of genera of dinosaurs, for example, having fallen from 30 to 7 during this era. However, the K-T boundary is now generally believed to have been precipitated by the impact of a 10-km-wide asteroid which created the Chicxulub crater.