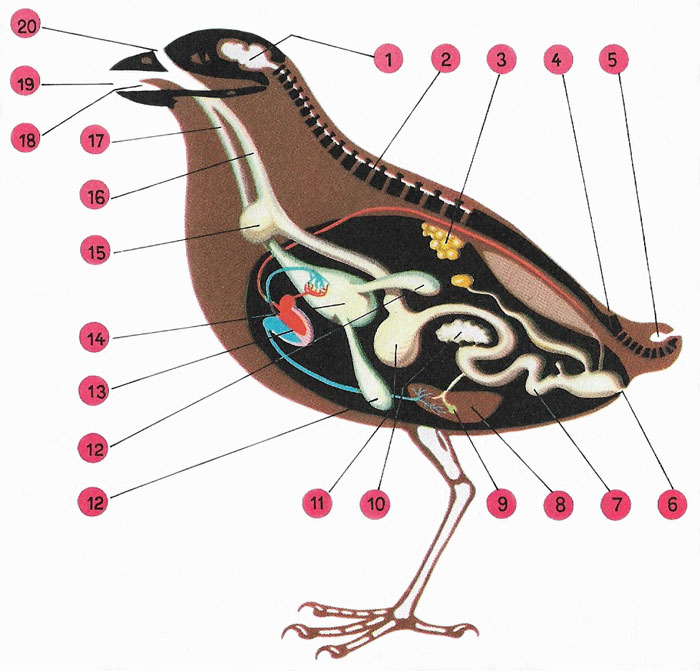 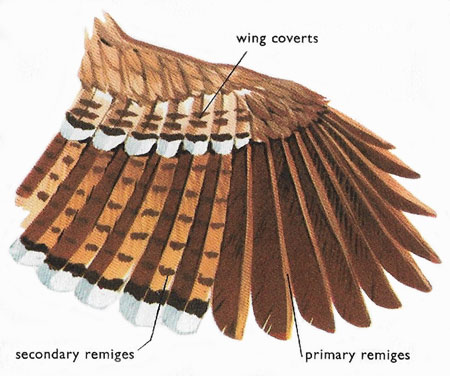 Fig 3. Stages in the wing-beat of a bird.

A bird is a member of the class Aves of vertebrates distinguished by having feathers, two legs, and two wings. Birds are warm-blooded animals, and their young hatch from eggs.  Birds evolved from a group of dinosaurs known as maniraptoran theropods – generally small meat-eating dinosaurs that include Velociraptor. About 10,400 extant species are known.

Many of the bones in a bird's skeleton are hollow to reduce the weight of the animal for flying. Like humans, a bird has ribs. These form a protective cage around the heart and lungs. The backbone and shoulder and hip girdles are adapted so that the weight of the body is carried on the wings in flying and on the legs in walking. The large flight muscles may account for one-fifth of the total body weight and are attached to a large, keeled breastbone and the upper part of the wing.

A bird has large air sacs in the spaces in its body and even in the hollow bones. They are filled with the air that passes through the lungs when the bird breathes and are emptied through the lungs when the bird breathes out. In land animals, air flow is bidirectional: air travels through a network of channels, and stops at the alveoli where oxygen-carbon dioxide exchange takes place. Used air, containing carbon dioxide as a waste product, follows a reverse course in leaving the lung and is discharged through the windpipe. In birds, however, air flow is unidirectional. New air comes in one end, and the used air goes out the other end. This provides an uninterrupted supply of oxygen, necessary to meet a bird's high level of energy consumption. Fig 1.

In the remote past, the forelimbs of the reptilian ancestors of birds were transformed into wings, and their scales into feathers.

The wing consists of the arm, and on its three main segments (upper arm, forearm, and hand) are borne the large feathers used in flight (Fig 2). As the arm is developed purely as a flying organ the fingers have been lost. They are present in Archaeopteryx, and there is one living bird which retains its first two fingers in the form of a claws while it is young, and uses them for climbing about among trees and bushes. This is the hoatzin of Guinea and Venezuela.

Birds fly in two ways. Firstly, they beat their wings, opening them out and then closing them with a powerful stroke against the body (Fig 3). Secondly, there is what is called 'soaring flight', in which the wings are constantly open and extended. Here the bird takes advantage of ascending air currents, just as a glider pilot does. Eagles and albatrosses are masters of soaring flight. The wing-beats of birds vary in speed; usually, the larger the bird, the slower the beat of its wing. Swans and pelicans beat their wings only once or twice a second; in hummingbirds the beat is so rapid that the wings vibrate and produce a buzz like that of an insect.

The size of birds ranges from the bee hummingbird, 6.4 cm (2.5 in) to the wandering albatross, with a wingspan of 3.5 m (11.5 ft). The 2.5-m (8-ft) tall ostrich is the largest of living birds, but several extinct flightless birds were even bigger. Of the 27 orders of birds, the perching birds (Passeriformes) include more species than all others combined.

There are several groups of flightless land birds, including the ostrich, rhea, emu, cassowary, kiwi, and penguin.