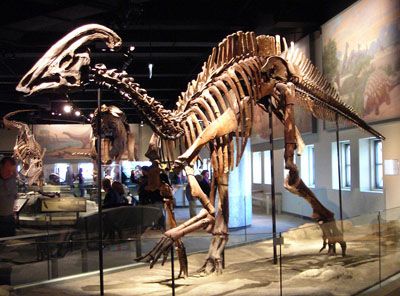 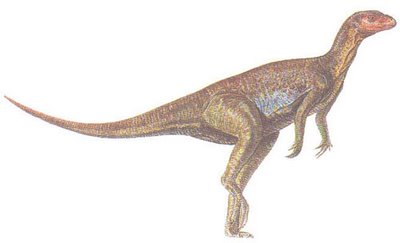 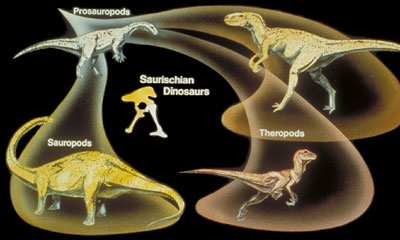 A dinosaur is any of a large number of terrestrial reptiles that lived during the Mesozoic era, between about 225 and 65 million years ago. Dinosaurs were mostly egg-laying animals, ranging in size from 90 cm (31 in) to 27 m (90 ft). There were two orders: Saurischia (lizard-hipped), which included the bipedal carnivores and the giant carnivores, and Ornithischia (bird-hipped), which were smaller herbivores. Their posture, with limbs vertically beneath the body, distinguishes them from other reptiles. The name "dinosaur", which comes from the Greek for "terrible lizard", was coined by the English paleontologists Richard Owen in 1842.

Dinosaurs diverged from their archosaur ancestors about 230 million years ago during the middle to late Triassic period, some 20 million years after the great Permian-Triassic extinction event, which wiped out an estimated 95% of all life on Earth. The last of the dinosaurs died out at the Cretaceous-Tertiary boundary, about 65 million years ago. There is good evidence that birds are the living descendants of ornithischians. It has also been speculated that had the dinosaurs not become extinct, some ornithischians could have evolved to become fairly intelligent (see intelligent dinosaurs).

A hadrosaur is any of various herbivorous dinosaurs of the family Hadrosauridae, whose most distinguishing feature was a duck-like bill. The hadrosaurs flourished in the upper Cretaceous Period. (Greek hadros: "thick, heavy".)

It used to be thought that the hadrosaurs had webbed feet and were therefore amphibious. However, this was a misconception arising from the fact that one of the early hadrosaur fossil finds had preserved skin impressions on the feet that made them appear to be webbed; it was later determined that these impressions were actually due to desiccated foot pads such as are seen on dried camel feet.

An ornithischian, or 'bird-hipped' dinosaurs, was any of a group of dinosaurs having bird-like pelvic girdles, with four prongs to each side (Fig 2). All were herbivores. Four-legged types includes the stegosaurs, with triangular bony plates along the back, and the armadillo-like ankylosaurs. The two-legged duck-billed dinosaurs were well equipped for swimming. There is some evidence that birds are the living descendants of ornithiscians.

A saurischian was a 'lizard-hipped' dinosaur, in other words, any of a group of dinosaurs having pelvic girdles typical of lizards, with three prongs to each side (Fig 3). They include the two-legged carnivorous theropods, such as Tyrannosaurus and Allosaurus, with enormous skulls and large teeth; and the four-legged herbivorous sauropods, such as Apatosaurus and Diplodocus, with very small heads and long necks and tails.

Living birds had common ancestors on the theropod lineage. Oddly enough, birds are derived from the "lizard-hipped" dinosaurs and not from the 'bird-hipped' ornithischian dinosaurs. The 'bird-hipped' condition of a pubis pointing toward the back of the animal occurred twice independently, once in the ornithischians and once in the lineage leading to birds – an example of convergent evolution.

A stegosaur is any of several herbivorous dinosaurs of the genus Stegosaurus and related genera, of the Triassic to Cretaceous period, having a double row of upright bony plates along the back.

Triceratops was a dinosaur that grew to a length of 6 m (20 ft), with a head bearing a short horn over each eye. The rear part of the skull was extended backward to form a bony frill over the neck.