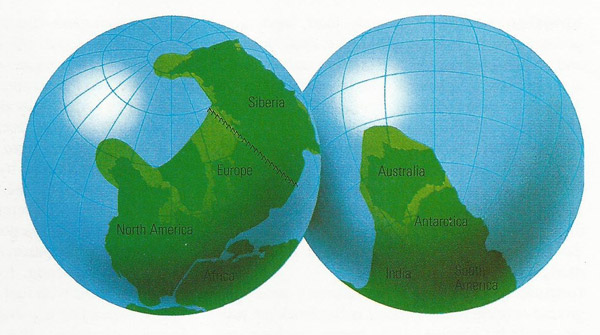 During the Triassic, the collision between the North America-Europe landmass and the Siberian plate pushed up the Ural mountains.

The Triassic is the earliest period of the Mesozoic era, spanning the time between about 251 and 206 million yr ago. The Triassic followed the largest extinction event in the history of life on Earth, and so was a time when the survivors of that event spread and recolonized. The organisms of the Triassic can be thought of as falling into three groups: survivors of the Permo-Triassic extinction, new groups which flourished briefly, and new groups which went on to dominate the Mesozoic world. This last group included modern conifers, cycadeoids, and the dinosaurs.