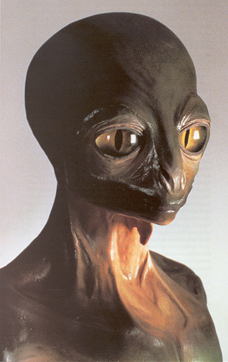 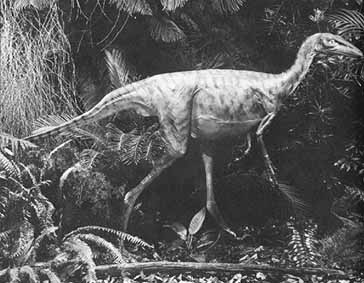 What would have happened if the asteroid that supposedly hit the Earth at the end of the Cretaceous period (see Cretaceous-Tertiary Boundary), 65 million years ago, had missed? One possibility is that the dinosaurs would not have become extinct, advanced mammals would subsequently not have appeared, and some of the descendants of dinosaurs might have evolved to become intelligent in our place.

It's clear that some dinosaurs were getting smarter at the time the asteroid that hit the Yucatan, and created the Chixulub Crater, handed the gauntlet to the mammals (fortunately for us). One of the brainiest dinosaurs we know about at the end of the Cretaceous was Troodon (aka Stenonychosaurus inequalis) a 1.2-m-tall, 70-kg carnivorous dinosaur with perhaps the intelligence of an opossum. What if Troodon had survived and continued to evolve and get brainier? In the early 1980s, paleontologist Dale Russell, curator of vertebrate fossils at the National Museums of Canada, in Ottowa, explored this possibility.1 Had the dinosaurs survived, argued Russell, and a species like Troodon grown smarter, it would eventually have needed to stand upright to balance its heavy head. A shoulder structure would have evolved to allow the "dinosauroid" to throw objects. Projecting how other characteristics of this species might have developed he came up with a model of a large-brained, reptilian biped with enormous eyes, three-fingered hands, an absence of external genitalia (typical of reptiles), and a navel (since a placenta is found in some modern reptiles and may have been needed to enable the birth of young with big brain cases).

Was Troodon the last word on dinosaur intelligence or are there fossils of even smarter species waiting to be found? It has been argued that some dinosaurs may have got to be really brainy – to the point of hominid intelligence. We've no evidence for this, of course, but it isn't such an outrageous hypothesis. At least, it's an interesting point when thinking about alternative evolutionary scenarios. The dinosaurs were around for a very long time – from about 225 to 65 million years ago. Consider how far mammals have progressed since the end of the Cretaceous (a period less than half as long): from creeping around in trees to launching Jupiter probes! Consider how rapidly humanoid intelligence has advanced in the past 3 million years. Dinosaurs certainly had time to grow big brains and even develop a culture and civilization. Did they? Probably not, but it isn't out of the question. After all, what clues will be left to our own civilization and technology after 65 million years of erosion and earth movements?

In the Star Trek Voyager episode "Distant Origin", a sentient race of space-faring dinosaurs (the Voths, see illustration) on the far side of the Galaxy discover they may have originated on Earth.

Also in science fiction, Harry Harrison explored the consequences of saurian intelligence in his West of Eden series.

1. Russell, D. A. and Sequin, R. "Reconstruction of the small Cretaceous theropod Stenonychosaurus inequalis and a hypothetical dinosauroid," Syllogeous, 37, 1 (1982).