Ichthyosaur (reptile), whale (mammal), and fish are similar in appearance but have a very different ancestry. 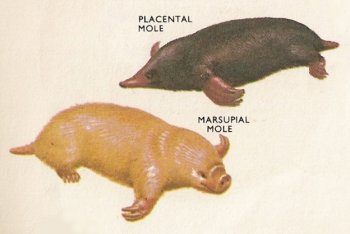 Convergent evolution is the independent development of similar structures or capabilities in organisms that are not directly related. Examples include the eyes of cephalopods (see octopus eye) and mammals (see eye), and the ability to fly of certain insects, birds, bats and teleost (bony) fish. The frequency with which convergent evolution, or convergence, has occurred on Earth supports the idea that certain basic anatomical structures and physiological mechanisms might be common among life forms throughout the Universe.

One of the reasons that convergence happens is that some body structures and shapes are simply the best biological solutions to basic problems in physics. To travel quickly and efficiently through water, it pays to have a sleek, smooth body with a wide muscular tail or other appendages to provide forward motion. It comes as no great surprise then that whales resemble fish in external appearance. They are streamlined in shape. They have a fluked tail, a pair of flippers as forelimbs, and, in some cases, even a dorsal fin along their backs. One hundred and fifty million years ago, another fish-like creature swam the seas. Though it became extinct 70 million years ago, fossils of its bones enable its appearance to be reconstructed. But, far from being a fish, the preserved skeletons show beyond all doubt that the creature was a reptile. Because of its remarkable resemblance to a fish, it was called an ichthyosaur or fish-lizard (Greek, icthys, a fish; sauros, a lizard).

Convergent animals may look alike but it is easy to show that they are entirely different creatures with very unlike ancestors – their resemblance in appearance is not due to close relationship. The structures which give the resemblance often do not develop from a common feature in an ancestor. Such structures with unrelated origins but with the same functions are said to be analogous.

Cut off in the continent of Australia, the marsupials or pouched mammals have been able to flourish for 150 million years. In most other parts of the world they have disappeared, for competition from the placental (unpouched) mammals proved too much.

Australia offers a wealth of environments, and many different marsupials evolved, filling the niches. The similarity in appearance between the various marsupials and placental mammals providing striking examples of convergence. Thus Australia has its wolf – the Tasmanian devil; it has its native "cat" (Dasyurus) and its native "mouse" (Dasycercus). There are "anteaters" and "sloths". The flying phalanger is comparable with the flying squirrels and the wombat with ground hogs. Australia even has its own marsupial mole.

Marsupials and placentals are all mammals and do possess a common ancestry in the not-too-remote past. Convergence can, however, produce similarity between completely unrelated creatures. Thus insects and birds are far removed from one another, yet at a glance it is difficult to tell the difference between a humming bird and a humming moth. Both are the same in size, and both live off nectar in flowers and have converged in their hovering flight and their feeding methods.

Another remarkable example is the resemblance between the bill of the duck – a bird – and the bill of the platypus – a mammal. Both creatures obtain food by sifting mud; to perform this function they both have a broad flattened duckbill, giving their heads a similarity in appearance.

Of burrowing animals, probably the best known is the common earthworm – a long, slender creature with no notable structures projecting from its surface. Animals from other groups that have taken up a burrowing mode of life often possess an identical shape. For instance, there are the slow-worms and skinks (really lizards) and the cecilians (really amphibians). The shape and general appearance of the snakes also suggests that they have evolved from a burrowing group.

Convergence is not confined to the animal kingdom. Plants exposed to similar outside influences may also resemble one another in the structures they evolve. Hundreds of species of tree make up the three great rain forests of the world. Yet even to a specialist it is often difficult to tell one form from a completely unrelated form. All grow to great heights, lack branches on their lower trunks, develop similarly shaped foliage and similar bark.

In American deserts, cacti are characteristic plants. Their stems are swollen with water-storing tissues; they are covered in protective spines and do not carry leaves. Very similar in all these respects are the euphorbias, native to Africa. But despite the cactus-like appearance, euphorbias are not closely related to cacti.