A group of red kangaroo in the Australian bush. The one in the foreground is a mother with a baby in her pouch. 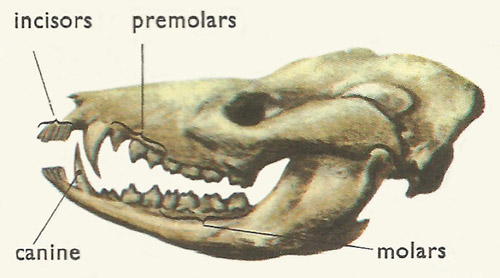 Skull of a primitive mammal. 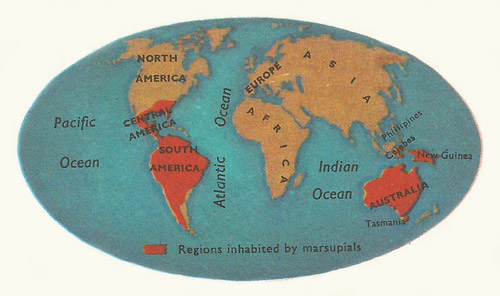 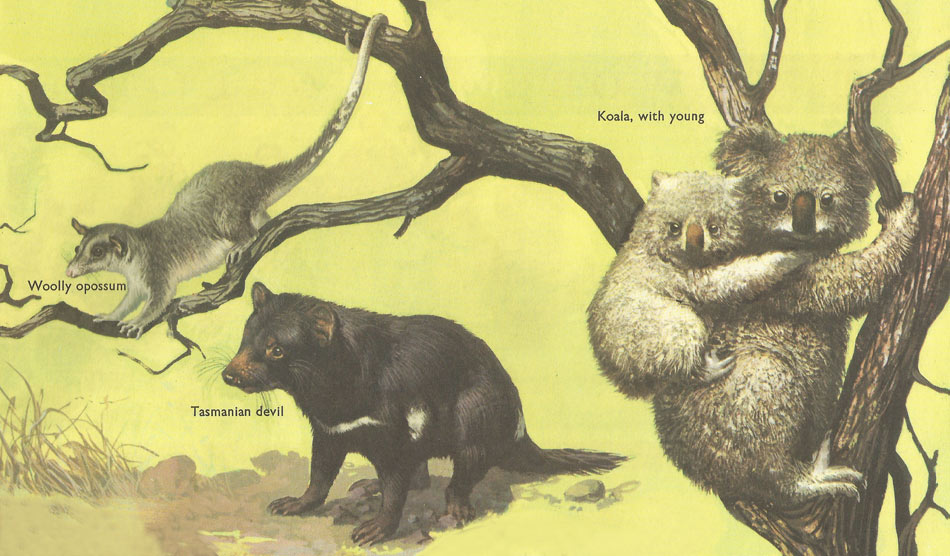 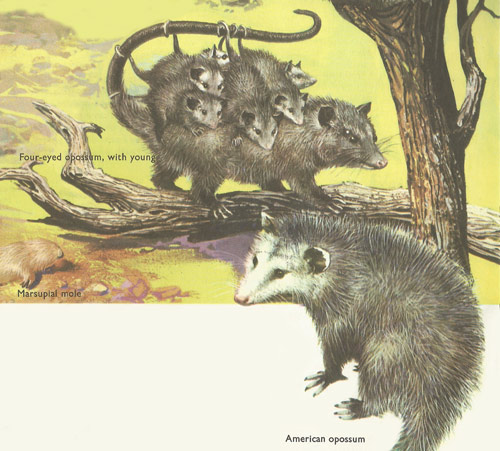 Two types of opossum: the four-eyed and American. 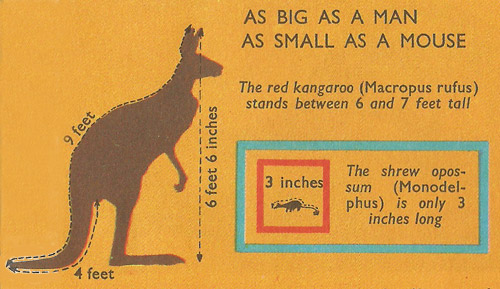 As big as a man as small as a mouse. The red kangaroo (Macropus rufus) stands between 6 and 7 ft tall. The shrew opossum (Monodelphus) is only 3 in long. We can regard the two marsupials illustrated above – the red kangaroo and the shrew opossum – as the giant and the dwarf of the order, as far as living species are concerned. Formerly, however, there were much larger ones. When the aboriginal people first arrived in Australia, sometime during the last 20,000 years, there was a huge beast living there, of which many fossil skeletons have been found. It was as big as a rhinoceros and may have looked rather like one, but it was a marsupial, and has been given the name Diprotodon.

A marsupial is a mammal, of the order Marsupiala, whose young are born while still embryos, and must crawl into its mother's external pouch (called the marsupium) to finish development. Marsupials are distinct from the placental mammals (which are the familiar types like horses, dogs, mice, and humans) in various anatomical details. Most marsupials are Australasian, and include such varied types as the kangaroo, koala, wombat, Tasmanian devil, bandicoot, and marsupial mole. The only marsupials to live outside Australasia are the opossums and similar species found in the Americas.

In many respects marsupials are primitive; for instance, they always have a full set of teeth, with incisors, canines, premolars, and molars all present. The most characteristic feature of the marsupials, and the chief difference between them and the placental mammals, is the way in which the young are born when they are still small embryos. The newly-born young of a 6-ft kangaroo is just over 1 in long. Naturally such tiny, undeveloped 'babies' require complete protection after birth, and the pouch or marsupium of the mother has been developed to provide this. In kangaroos and Australian opossums the opening of the pouch is directed forwards, but it opens backwards in most other marsupials. Some of the smaller rat- and mouse-like species have no pouches, and the young simply remain attached to the teats of the mother by their mouths until they are sufficiently developed to hang on to her fur with their feet.

The marsupials are now confined to Australasia, and to South and Central America, though one species extends into the northern United States. During the Tertiary period, however, they were much more widely distributed.

This is the largest of all the kangaroos, and the largest living marsupial, though the great grey kangaroo is nearly as big. When a red kangaroo stands upright it is between 6 and 7 ft tall. This animal is found over most of Australia, but its numbers are constantly being reduced because, since it feeds on grass, it is regarded as a pest by sheep farmers. Thousands of kangaroos are killed every year, and fences are put up to keep them away from the best grazing. The young of this big animal are just over an inch long when they are born. At six months old the baby begins to put its head out of its mother's pouch and look around, and it starts to venture out of the pouch at about eight months.

The thylacine was the largest carnivorous marsupial, and looked rather like a dog or a wolf. It had been common in Tasmania, but when the European settlers started sheep-farming there the 'wolves' preyed on the sheep. And the farmers did their best to exterminate them. It is believed to have become extinct sometime in the twentieth century.

This is another carnivorous marsupial that is found only in Tasmania. It is about as big as a large cat and very strong for its size, but its reputation for fierceness is exaggerated. The pouch of this species and of the thylacine opens backwards.

We have described a marsupial 'mole' and 'wolf', now here is a marsupial 'bear'. This animal, found in Australia, looks more like a toy teddy bear than a real one. It lives among the branches of eucalyptus trees, feeding on the leaves which are the only food it will eat. At one time it was mercilessly hunted for its fur, but it is now protected. Forest fires and destruction of trees have also tended to reduce its numbers.


Marsupials of the American continent

This is the only marsupial that is adapted for swimming; it might well be called a 'marsupial otter'. The water opossum is found in tropical America, from Guatemala southwards to Brazil. It has a long, naked, scaly tail, and its feet are webbed. Although it is carnivorous, feeding on fish and other aquatic creatures, it has cheek-pouches; these are characteristic of vegetable feeders, like hamsters, but no other carnivorous mammal possesses them. It is hard to see how the mother can go swimming while her young are in her pouch, but it is not known for certain whether she really stays on land for the whole time that she carries them.

This opossum has been given its rather strange name on account of the conspicuous white spot above each eye. It is about the size of a rat, and its tail is prehensile and furry only at the base. When the young leave the pouch they climb on their mother's back, and sometimes hold on by curling their tails round hers.

This pretty little marsupial lives in trees, climbing about with the help of its prehensile tail which is longer than its head and body combined and can be curled round twigs and branches. It eats fruit and insects.

This is the only marsupial found widely in North America – from Mexico to the northern United States. It is about the size of a cat, and is nocturnal and an expert climber, preferring to live in wooded country. It will eat almost anything: fruit eggs, insects, small birds, and mammals, and sometimes domestic poultry. Opossums may give birth to as many as 18 young, but when such large litters are born some are usually abandoned at once, and the number to come to maturity is seldom more than half-a-dozen. The Virginian opossum was almost certainly the first marsupial ever to be seen by Europeans.